Winners of the 2019 Coca-Cola Suzuka 8 Hours, the official Kawasaki Racing Team entry of Jonathan Rea, Leon Haslam and third rider Toprak Razgatlioglu were aboard an incredibly special Ninja ZX-10RR in the Japanese endurance classic. Here are an assortment of factors that differentiate KRT’s Superbike World Championship (WorldSBK) contender to the 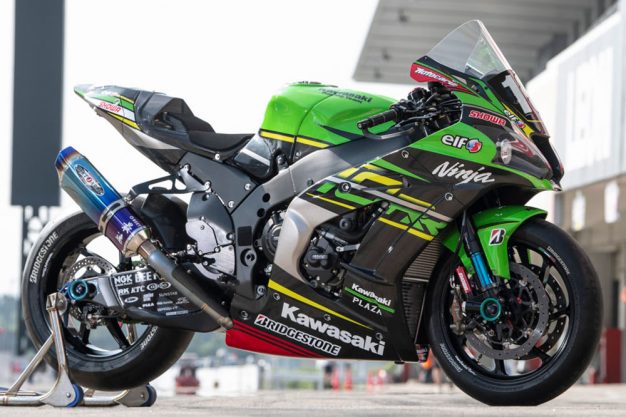 Q: How does the approach differ when it comes to competing at Suzuka?

A: The prestigious Suzuka round of the Endurance World Championship (EWC) has always been thought about in two ways. It is either the longest sprint race in the world or the most intense endurance race imaginable. In reality, both of those seemingly opposite ideas are correct, which means potential winners have to make their most potent machine race at full pace for the entire eight hours, in some of the most punishing conditions there are. Fundamentally, the WorldSBK and EWC share many technical regulations, but there have to be some changes made by regulation and some to allow for quick turnaround in pit-lane at each fuel stop.

Q: Is the engine dialled down much for the 8-hour?

A: The engine spec of the Rea/Haslam/Razgatlioglu machine at the Suzuka 8 Hours is more or less the same as the KRT WorldSBK machine, even in terms of the major engine parts and components. An engine in any modern Superbike cannot be thought of as a standalone unit, as what really controls its potential performance is ‘mapping’ – the relationship between ignition and how much fuel and air the engine is given at any one point in the rev-range. In general, the leaner the fuel/air mixture is, the more power it makes and the more aggressive the engine responds to throttle demands. A Suzuka 8 Hours-spec machine can make the same outright power as the WorldSBK bike, but whether it does so in any one session is down to how the mapping is set-up. And this depends on the team’s overall race strategy, which is arrived at after practice and qualifying data has been examined. And, to nobody’s surprise, that is confidential information.

Q: What else is notably revised from a component standpoint?

A: It may surprise some people that, despite the race taking place in ambient temperatures often well into the high 30-degree range, the WorldSBK KRT engine cooling system is so good that no real changes are made. No double radiators, no extra oil coolers – the WorldSBK set-up is refined and capable enough to cope. One major component difference is in the gearbox itself. EWC technical regulations allow for a ‘free’ gearbox, rather than one pre-defined set of internal rations that the teams must use all season long in WorldSBK. Internal ratios can be altered for Suzuka making the right gearing in each corner exit as much of a performance tool as a powerful engine. Full use is made of this freedom, with all six gears used in the race. First gear is selected three times over each lap of the 5.821km ‘figure eight’ circuit.

Q: How much do the riders compromise in terms of ergonomics and bike preferences?

A: As all three riders share the same EWC machine, there was the potential for more of a compromise overall riding position decided on for the race than last year. The tall Toprak and shorter Haslam both need to have a riding position that they can happily race with and so does Rea, who ranks in the middle of his Suzuka team-mates in terms of his height. This need to make everybody fit the same bike every bit as valid a part of the overall technical preparation and bike set-up calculation as any other. 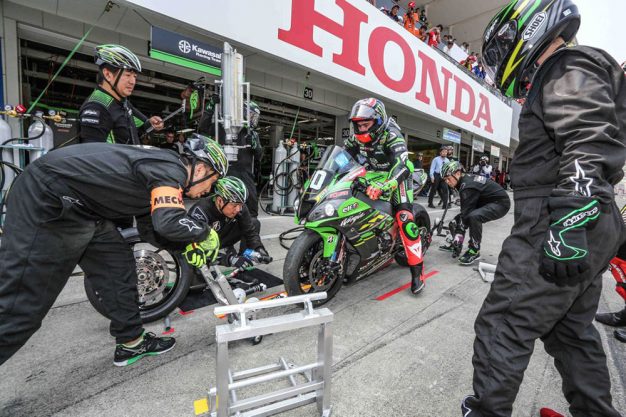 Q: Tyres are critical and Bridgestone is the brand to be on at Suzuka. Is that a big change from Pirellis in WorldSBK?

A: Possibly the biggest WorldSBK-to-Suzuka change for the technical staff and riders to engage with is the jump from WorldSBK’s single-make Pirelli tyres to the Bridgestones that are used at Suzuka. Their different tyre constructions and characteristics offer up a different load request from the suspension and chassis, but the suspension units, plus the rear suspension link, are the same as those used in WorldSBK.

Q: What does KRT do in order to make pit-stops as efficient as possible?

A: During the race both tyres are changed at every stop to maximise performance on track. But performance in pit-lane is often the deciding factor in endurance racing, which brings in some real component changes from the WorldSBK scene and some much more regular use of some other parts. Time saved in the pits is just as valuable as time made up on track – the stopwatch does not differentiate. Quickly detachable handlebars, footpegs, brake lines and quick wheel-change systems are all introduced in EWC, to help in pit stop and potential crash damage scenarios. WorldSBK machines may look like they run headlights but they are just stickers, while the Suzuka bike features small but very real Xenon front headlamps and LED taillights. The wiring loom is split into sections to speed up pitlane work, but the ECU location is unchanged. KRT runs a standard generator and battery, as they do in WorldSBK, as the engine must start on the button, as it were, at any point in the 8-hour race. The fuel tank is taken out to the maximum 24-litre capacity at Suzuka and is fitted with two spring-loaded fuel caps to allow the use of twin hose fillers. Fuel goes into one tank opening through one hose and when it comes out of the other transparent hose, the tank is completely full.

Q: Is anything else changed in the pits?

A: Even with the race held over eight hours, one complete set of brake pads are used, but they are of a harder than usual pad compound and wider in thickness to last longer. The brake calipers are also different from WorldSBK, to allow the fitment of those wider pads.