Brno ‘most difficult race of the year’ says Petrucci 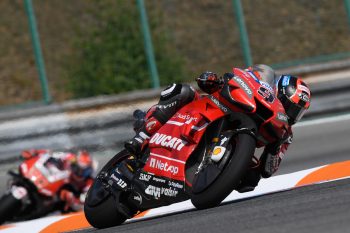 Mission Winnow Ducati’s Danilo Petrucci says Brno’s 10th round of the 2019 MotoGP World Championship was his ‘most difficult race of the year’, the Italian ultimately mustering up an eighth place finish.

Racing at the Czech grand prix was delayed to offer better track conditions from recent rainfall, however Petrucci admits he was already struggling to gel with the circuit before running out of grip in the 20-lap encounter.

“For sure this was the most difficult race of the year for me,” Petrucci stated. “I missed out on being able to lap in the dry yesterday, because already on Friday I was struggling a bit at this circuit.

“The race was tough because right from the start I didn’t have much grip and the leaders went away immediately, and then it was also difficult to fight with the others because in the final stages I had finished the tyres.

“Pity, because Rins made up a few points on me in the standings even though I’m still in third, but luckily tomorrow we’ll have an entire day of testing to understand what to improve.”

Petrucci still holds down third in the standings as the series heads to the Red Bull Ring in Austria this weekend.