Australian records second podium of the season at the Czech grand prix. 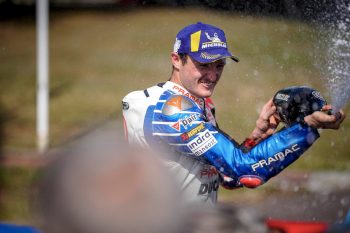 The Pramac Racing rider, who started from P2, waited until the dying stages of the race to make the manoeuvre as the Suzuki ran short of grip, ultimately riding to his second podium of the season.

“It was nice to fight there at the end,” said Miller. “I stayed rather calm. Rins was spinning quite a lot with the rear tyre. I just waited and waited and he was really struggling, especially up Horsepower Hill, he was spinning a long way up the hill and I thought, ‘he’s getting close to base rubber now’.

“That Suzuki turns so well – I held my line really tight at turn one, but it wasn’t quite enough. I just knew I had to be patient and take my time. My front tyre was probably my biggest downfall.

“I’m glad we chose [the hard tyre] – it would have been nice to have more dry track time over the weekend but hey, we’re here. Thanks to the team. We’ve been pushing really hard over the last couple of races. It’s really nice to stand back here.”

Miller is now ranked seventh in the championship standings as the MotoGP World Championship heads to Red Bull Ring in Austria this weekend.