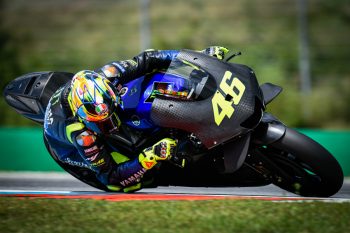 Rossi admitted there aren’t too many changes, however did disclose there’s a new specification engine along with slight adjustments to the chassis settings.

“We also tried the prototype of the new bike, but sincerely we don‘t have a lot of changes, it‘s a different engine and a slightly different setting of the chassis,” Rossi explained. “But these are just the first touches, and what we have is already good.

“After that we worked more with the standard 2019 bike. Some things on the 2020 prototype are good, some things need to be tested again in Misano. This is to be expected because it‘s just a trial run, and we might have something else at the next tests, later on this season.”

Vinales tested the 2020-spec bike for a number of laps, although predominantly focused enhancing his current set-up after finishing 10th at the weekend’s grand prix.

“I tried the prototype for a few laps, but I preferred to concentrate on improving my 2019 bike for Austria,” said the Spaniard. The laps on the 2020 bike were good though, they were good lap times, so we will see at the next test.”

Vinales was second on the timesheets at the completion of testing, while Rossi set the sixth fastest time. The duo return to action this weekend at the Red Bull Ring in Austria.