Queenslander yet to formalise his future as MotoGP silly season erupts. 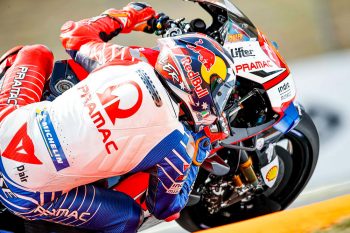 Australian Jack Miller has spoken out about the stunning rumour that he could be replaced at Pramac Racing by Jorge Lorenzo in a shock return to Ducati for 2020, which would see the Spaniard quit Repsol Honda halfway through a two-year deal.

Just days after scoring a second podium of the current MotoGP season at Brno, 24-year-old Miller’s seat on the factory-supported satellite squad has been linked to three-time premier class title-winner Lorenzo.

Thursday in Austria saw the speculation escalate and Miller admitted that he believes there is some truth to the rumours. After agreeing to terms with Pramac to ride a GP20 next year, he’s been awaiting a contract from Ducati to finalise the arrangement. It’s yet to surface.

“I think there is some truth to the rumours about Lorenzo,” commented Miller at the Red Bull Ring. “For sure, he’s looking at something because at the moment he’s got nothing. He can’t ride that Honda, so it’s easy to tuck your tail between your legs and run back…

“I think that Pramac loves me and want to keep me – most people in Ducati want to keep me – but I’ve got to make sense of why we’re in Austria, quite well into the second half of the season with two podiums under my belt, and I’ve still not signed a contract.

“Most of the details have been sorted, Pramac has agreed to everything they’ve been asked to agree to, but still no contract has arrived. We’ll wait and see – all I can do is keep doing my best. This is my first year on the latest material in MotoGP and this is the most competitive era it’s ever been in and I’ve scored two podiums and been in front of those guys on multiple occasions.

“I feel that I’ve been doing everything I can do in order get myself a job. I’m not stressed at all. “Nearly everyone in Ducati wants to keep me… some people have fond memories, but like I said, I’m not stressed. I’m just here to do my job.”

Miller is currently seventh in the MotoGP championship standings following the opening 10 rounds, the leading Independent rider in the championship with third-place finishes at both Circuit of the Americas and Brno.

A tie to the factory Aruba.it Racing Ducati team in the Superbike World Championship (WorldSBK) has also been rumoured for Miller, although it isn’t something that he has considered. With Alvaro Bautista tipped to be going to Honda in WorldSBK, Ducati is searching for a replacement, which could be a path to the world championship for British points-leader Scott Redding.