Testing crash rules Mir out of Spielberg MotoGP round 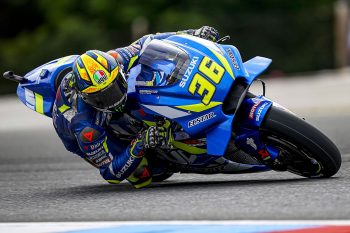 Team Suzuki Ecstar’s Joan Mir has been ruled out of the Austrian grand prix following a post-race crash while testing at Brno.

The Spaniard escaped serious injury in the fall, however, a pulmonary contusion required him to be transported by helicopter to hospital for further observations.

Given his current condition, Team Suzuki Ecstar together with Mir decided not to take any risks, preferring to allow time for rest and recovery instead of trying to take part at Red Bull Ring.

“It’s such a shame to miss this race following the incident in the Brno test,” Mir said. “It was a big crash and I was transferred to the hospital for further checks because I rolled through the gravel many times and took a lot of hits. At the beginning, I struggled to breathe because of the pulmonary contusion, but step by step I improved and now I’m feeling better.

“The next thing is to go to the Hospital Dexeus where I will undergo some more medical checks so I can be assured that everything is alright, then I will head home to recover and restart my training. It’s a big pity because I was feeling really good with the bike and we were completing a fantastic test.

“Now I have to think day by day, try to recover and aim to be 100 percent for Silverstone. I want to keep up my momentum with the bike and continue growing in the top class. I must thank all the people who looked after me, from the Clinica Mobile, to the circuit medical staff, Brno hospital and all the team members. Thanks also to all the fans who have sent lots of supportive messages.”

Despite the fact that he didn’t suffer major injuries, his lungs are still inflamed and they will require proper rest to recover. On his return to Spain he will head to Barcelona where he will undergo further checks before returning home to Andorra to take the necessary time to rest and heal, attempting to be fully fit for Silverstone.