Pramac Racing rider crashes out while challenging for the top three. 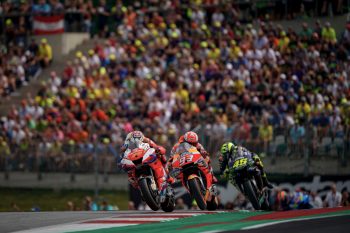 A regretful error in the opening half of the Austrian grand prix while challenging for the top three ultimately denied Jack Miller of scoring back-to-back podiums, which the Australian believes he was a strong chance to wind up on the box.

On lap seven while battling with Fabio Quartararo (Petronas Yamaha SRT) for third position, Miller slid out at turn nine and saw a promising weekend come to a premature end.

“I’m disappointed because if I’m to be honest, I felt like I had the podium in my hand,” Miller explained. “I tried to attack Quartararo and the feeling was very positive. Unfortunately I made a mistake and my race was over. It’s a shame because we did a great job this weekend and for that I thank my team.”

Miller indicated last week that there’s ‘some truth’ to speculation of Jorge Lorenzo seeking a return to Ducati albeit at Pramac Racing, which has resulted in a delay of his 2020 signing with the outfit, however it’s since been understood that Lorenzo will honour his contract with Repsol Honda next, making Miller’s official contract extension imminent.

The Pramac Racing ace now sits eighth in the points rankings as the MotoGP World Championship heads to Silverstone in Great Britain, scheduled on 25 August.