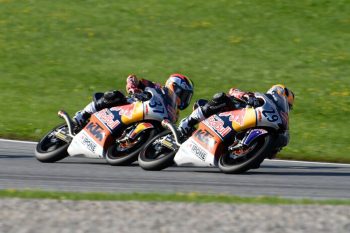 Van Eerde charged to a stellar P2 result in Saturday’s opening encounter, engaging in a thrilling battle for the top spot after coming back from 11th on the grid.

Backing up the result in race two, the New South Welshman put on an excellent display in the 17-lap outing, crossing the line in P3 – just 0.111s off victor Haruki Noguchi.

“It was such a great race, I just kept pushing and never gave up,” said van Eerde. “I wasn’t so happy with the bike in qualifying and was only 11th on the grid. It was a bit unstable but I talked to Santi and he had it sorted for the race. In the last corner Noguchi came across and I lost my drive just a bit but I’m so happy to get on the podium.”

“[Race two] was a different race to yesterday, I was stuck more in the pack. Things were so close this time that I couldn’t find the line I needed and it was very hard to make progress. I just kept pushing though and made it work at the end.”

The 17-year-old sits ninth in the championships standings as the Rookies Cup heads to Aragon in Spain on 21-22 September.