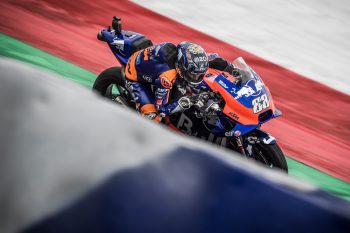 At KTM’s home grand prix in Austria, MotoGP rookie Miguel Oliveira put on a stellar display of riding as he scored his first-ever top 10 finish in the premier class at the Red Bull Ring.

The Red Bull KTM Tech3 rider started from P13 on the grid, quickly making his way into the top 10 where he challenged for position, crossing the line as the first KTM-mounted rider in eighth.

“It was a great race today,” said Oliveira. “My pace was very good as we saw yesterday already. I’m quite happy about this result, the first top 10 for me and for the team with the KTM bike.

“I’m really glad and I think we deserve this after we’ve been working really hard, understanding the bike and everyone has been very good at helping me. So I think this is a decent payback to KTM here at their home GP. Now we go with a good feeling to Silverstone.”

Oliveira signed a contract extension with the KTM Tech3 squad back in May, solidifying his spot on the grid in 2020. The recent confirmation of Johann Zarco’s departure from Red Bull KTM Factory Racing at season’s end has prompted speculation of the rookie being promoted to the factory squad next year.