Tyre gamble pays off for Quartararo in Austrian GP podium 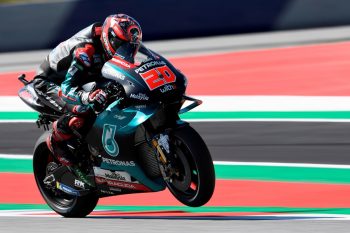 The Petronas SRT Yamaha rider rode strongly all weekend, qualifying in P2 before leading the opening laps of Sunday’s encounter. He hung onto to third as he crossed the line, landing a podium finish for the third time this year at a track that historically doesn’t favour the Yamaha YZR-M1.

“We never expected to be able to finish on the podium at this track, but I managed to get a good start and when Marc [Marquez] and Andrea [Dovizioso] went a little bit wide it let me through,” Quartararo explained. “The first five laps in the lead were the most difficult.

“Taking the soft tyre was a bet, but we learned many things in this race and it paid off. I knew that the leaders could always push each other wide or something, so I tried to push all race to stay close to them just in case – and I hope that next time I can be in the fight for the win with them!”