Australian claims British Superbike Championship lead at the eighth round. 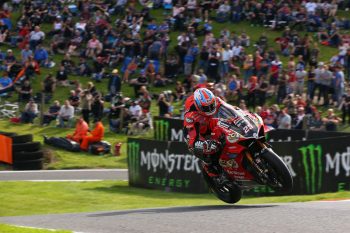 Reverting to a proven setting has led Australian Josh Brookes to claim King of the Mountain honours after a victory in race two at Cadwell Park’s eighth round of the 2019 Bennetts British Superbike Championship Championship (BSB).

The Be Wiser Ducati ace stormed to second in the opening race before clinching a thrilling win in Sunday’s second encounter, the victory promoting Brookes into the championship lead as the series heads into the Showdown.

“I’ve had two great races this weekend and whilst at Thruxton I didn’t feel like I was riding on top form, here I did and properly showed what I can do,” Brookes explained. “We’ve been quick from the off and having the test on Thursday gave us a bit of luxury ahead of race weekend, so we’ve only had to make really small changes all weekend.

“The first race was really enjoyable, and I tried to lead from the front and make a bit of a break but although I managed to get a bit of a gap it wasn’t enough as Danny came with me. When he came past, he was riding superb and I couldn’t fault him at all. We’d made a change after morning warm up which didn’t quite work and although I tried to match him, I couldn’t do any more than what I was doing and settled for the second place.

“For race two, we went back to the setting that had worked previously and this time it was Tommy who was riding really well but I could see he was using every bit of what he had and when I managed to get by him, I had that little bit more grip. It was another great race and it’s great to come away with the King of the Mountain title and the championship lead for the first time this year.”