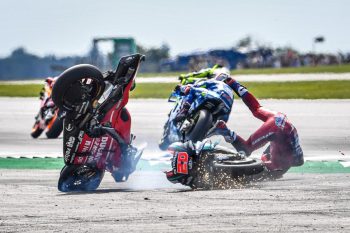 Quartararo high-sided on the exit of turn one following a slight mishap ahead of him from eventual winner Alex Rins (Team Suzuki Ecstar), with his YZR-M1 crossing into the path of Dovizioso and ultimately causing a frightening crash between the pair.

On-track medical assistance arrived immediately and Dovizioso was transported to the medical centre, where doctors found that he had a concussion and a number of contusions, prompting him to be transported to hospital for further checks that fortunately cleared him of serious injury.

Quartararo was left suffering from a concussion after the heavy tumble, for which he was also sent for further medical assessment at the local medical facility.

“[Alex] Rins had a small slide in front of me and I shut the throttle a little too much to avoid him and then highsided,” Quartararo explained. “It’s a pity for the result, but more importantly I hope that Andrea [Dovizioso] is okay.

“It was a racing incident, and just bad luck for both of us. All weekend we were fast and the worst position of the weekend was fourth in qualifying. I had the same pace as the top guys and I’m really happy with the improvements we made this weekend. The team made a big step forwards together and it’s something we can build on.”

The pair will both have to undergo a medical examination at the Misano grand prix on 15 September in order to be cleared to race.