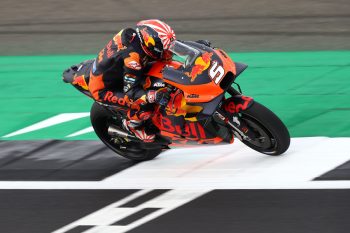 Red Bull KTM Factory Racing’s Johann Zarco has been penalised for the attempted pass he made on Miguel Oliveira (Red Bull KTM Tech3) at the British grand prix, which saw the duo make contact and subsequently crash out of the 20-lap encounter.

The Frenchman has received a three-place grid penalty for the next grand prix at Misano in Italy, with the incident being the latest undoing for the Frenchman in a challenging 2019 season.

“It was a shame about the crash because the race was interesting,” said Zarco. “I was in control and looking to overtake Miguel in that slow corner – as I was doing to a few others in practice – and in the end I just had to apologise to him for destroying his race. The whole weekend I showed a bit better pace. I will just have to wait for Misano now and hope to have the same kind of feeling.”

Red Bull KTM Factory Racing team manager Mike Leitner added: “We are happy because we know this track is very difficult. We are not so happy with the race crash from Johann and it was unlucky that he hit Miguel and both riders went out. We have to take it like it is.”

Zarco’s troubling campaign has prompted him to call it quits with KTM at the end of this year’s championship, despite a year still remaining on his contract.