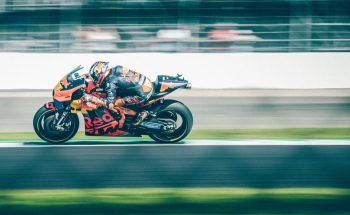 Red Bull KTM Factory Racing’s Pol Espargaro has been motivated by the RC16’s increased competitiveness at the weekend’s British grand prix, where he challenged for position inside the top 10.

The Spaniard qualified in P13 before putting on an excellent display of riding, pushing for a top 10 as he crossed the line in P9, just two seconds shy of the sixth place’s Cal Crutchlow (LCR Honda).

“It was a difficult race and the temperatures were quite high at the end which made the track slippery, more than we expected, and I was struggling with the rear tyre,” Espargaro explained. “Anyway, we were in the group fighting for sixth and we should be happy.

“We took some good points and we are playing for the top ten in the championship. The bike is getting better and better and we are doing a good job to be competing with the Hondas and Ducatis. Misano next and it is not the easiest for me but I have been fast in the past. We have a test in a couple of days and we’ll see what we can do.”

Espargaro sits 11th in the MotoGP World Championship rankings ahead of Misano’s 13th round, scheduled for 13-15 September in Italy.