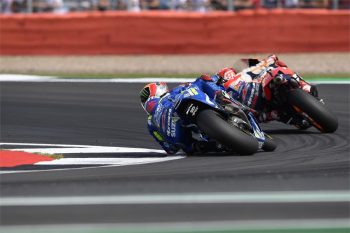 Spaniard Alex Rins has described his gripping win over Marc Marquez (Repsol Honda) at Silverstone’s British grand prix as ‘unbelievable’, the Team Suzuki Ecstar rider making an intelligent pass on the reigning champion in the dying moments to steal victory.

Rins challenged the points leader right throughout the 20-lap outing, moving into the lead on numerous occasions before diving up the inside of Marquez as they headed down the final straight, where he edged out the number 93 by just 0.013s.

“Today has been unbelievable,” Rins stated. “I won in Austin, beating Valentino, and now I’ve won here, beating Marc. These guys are very fast and are ‘legends’ of the sport. I knew it would be difficult to beat Marc today, but I really wanted to try, and it was fantastic to do it.

“In a couple of the sectors he was faster than me, but I could make it up in some other areas. But towards the end of the race I felt I had better pace than him, and I told myself that I must go for it and take the chance, I saw the opportunity and I made it happen. Big thanks to everyone in the team.”

Rins now sits third in the points standings at the MotoGP World Championship visit Italy next on 13-15 September.