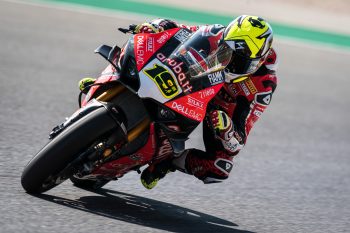 Alvaro Bautista admits he’s still experiencing shoulder pain as Portimao’s 10th round of the 2019 Motul FIM Superbike World Championship (WorldSBK) looms next week, which the Spaniard discovered after recently testing at the venue.

Bautista, who once held a 60-point lead before a dramatic drop in form pushed him to 81 points behind current leader Jonathan Rea (Kawasaki Racing Team), injured his shoulder six weeks ago at Laguna Seca in a Superpole race crash.

“These two days of testing have been very positive even though on the second day we weren’t able to do many laps,” said Bautista. “Unfortunately, the shoulder is not yet in a perfect condition and I felt a bit of pain. We preferred to stop early so as not to make things worse and to be in the best condition in a couple of weeks’ time.

“In any case, yesterday we did a lot of laps and all things considered I’m happy because I found a good feeling again with my Panigale. This was the first test since the last round at Laguna Seca, now we’ve got a few more days to fully recover.”

Speculation mounted at the Portimao test that Bautista will depart Ducati after one season with the manufacturer in WorldSBK, adding strength to rumours he’s heading to Honda next season.