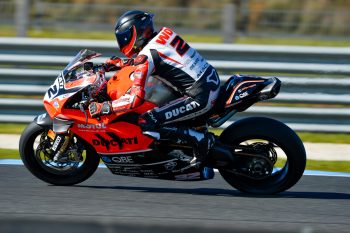 DesmoSport Ducati’s Troy Bayliss has made his first racing appearance aboard the all-new Ducati Panigale V4 R at Phillip Island’s third round of the Pirelli Motul Victorian Road Racing Championship.

Bayliss, who elected out of the Australian Superbike Championship (ASBK) in favour of drafting in Mike Jones after being injured at the beginning of the season, has had possession of the highly-anticipated model since the early months of 2019, however he’s only just sampled the machine in race conditions for the first time at the weekend.

The three-time Superbike world champion is targeting to roll out the V4 R on a national level at the Australian Motorcycle Grand Prix, which will feature Superbike and Supersport 300 categories as support classes to the MotoGP World Championship.

“We have had limited time on the Ducati Panigale V4 R,” Bayliss told CycleOnline.com.au. “This is the fifth time we have had the bike on track and coming here this weekend was all about putting some laps on the bike and try and make a bit of progress with it, as we want to race it at the Australian Motorcycle Grand Prix in the support event.

“For me personally, I’m just really happy that on a new bike it has been fantastic. We have seen how good the Panigale V4 R is overseas, however you can’t compare ours to the ones overseas as our bikes are so different – basically production bikes. So, we are on our own and we’ve tried a few things.

“In the third race we tried something different which turned the bike around which made it pretty good to ride. So, we are in the ball park now. It showed, as Mike has been on game all weekend and I was able to have a really good race with him. We know the bike is pretty good straight off the bat now and I’m sure we can make it better than what we have right now.”