Baz drafted into YART to replace Parkes at Bol d’Or

Frenchman reunites with YART as date clash forces Parkes out. 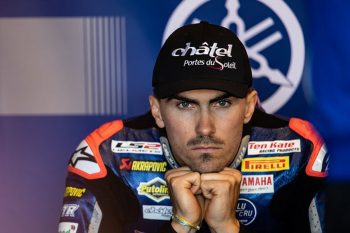 WorldSBK regular Loris Baz has been drafted into Yamaha Austria Racing Team (YART) for the opening round of the 2019/2020 Endurance World Championship (EWC), replacing Australian Broc Parkes at the Bol d’Or in France.

A clash in dates with the Asia Road Racing Championship (ARRC) will see Parkes sit out the EWC opener, as he currently leads the Asian series racing for Yamaha Racing ASEAN.

“I’m really happy to be making a return to endurance racing with YART Yamaha at the Bol d’Or,” said Baz. “It wasn’t on the plan, but I’ve always loved EWC, I have some really great memories from racing there and I have a good relationship with Mandy and the Yamaha guys so, when they called and my Ten Kate Yamaha team agreed that I could do it then, of course I said yes.

“It will make September a tough month, but I’ve been training hard over the summer, so it won’t be a problem. I’m happy to be back with Mandy – I always call him Daddy, because he was one of the few people to give young riders the opportunity to race in EWC, including 18-year-old me back in 2011.

“We finished on the podium at the 24 Hours of Le Mans back then and it will be good to return to YART Yamaha for the Bol d’Or, where the aim has to be to secure the win for Yamaha with Niccolo and Marvin.”

YART team manager Mandy Kainz added: “We’ve known Loris since he was a kid, and he did his first ever endurance race with us back in 2011 aged just 18. He was so young for an endurance racer that we always called him the baby and, to be honest, we still do. Loris did a fantastic job for us that season, before moving to WorldSBK the following year.

“Since then he’s always maintained his interest in endurance racing and he has kept in touch with the team, so he was the first rider we spoke to when we needed a replacement for Broc. I would like to say a big thank you to the Ten Kate Yamaha Supported WorldSBK team for allowing him to race for us, in what is already a busy month.

“The Bol d’Or remains the only European EWC race that we haven’t won. We’ve come close on a number of occasions, including last year when we were second by just 54 seconds, but the top step of the podium has so far eluded us. With Loris, Marvin Fritz and Niccolo Canepa we have an incredibly strong rider line-up and we head into this year’s race determined to complete the full set with victory at the Bol d’Or.”