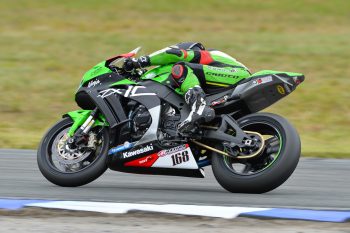 Team GSR Kawasaki’s Glenn Scott will sit out this weekend’s fifth round of the 2019 Motul Pirelli Australian Superbike Championship (ASBK) at Winton as he continues to recover from multiple injuries sustained in a high-speed crash at Morgan Park.

The Kawasaki-mounted contender maintains his frustration on Morgan Park’s safety standards, particularly at turn three where his incident unfolded, which is he was critical of the day after he was transported to hospital.

“I am very disappointed to be sitting out of round five this weekend,” said Scott. “The season was building nicely for us, we headed into round four leading the privateer championship and in a good position to continue our success on track.

“As a racer, we accept the dangers of racing a motorcycle at top speeds, however I can’t help but be frustrated that a corner, with a wall so dangerously close to the track, still exists in this day and age of racing. Fortunately, I was carried off the track and still conscious, but it’s extremely sad that a death is what it will take for something to be done about the ridiculous corner.

“I have been working hard on my recovery and time is what I need to regain full fitness for my neck and back. The hip is tracking well and I have great movement thanks to the physiotherapy. No time has been set on a return, however if the recovery continues in a positive direction we hope to be back on track this year.”