Change of approach declares Bautista ahead of Portimao 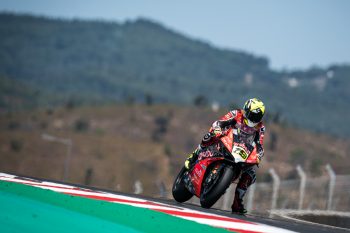 Aruba.it Racing – Ducati’s Alvaro Bautista has declared he’ll need to change his approach this weekend as he endeavours to conserve his ongoing shoulder injury at Portimao’s 10th round of the 2019 Motul FIM Superbike World Championship (WorldSBK) in Portugal.

The Spaniard suffered the injury prior to WorldSBK heading into its European summer break, however it continued to hinder him while testing at the venue two weeks ago.

Bautista is confident the two tests at the circuit this year will enable him to find a suitable set-up while also resting his shoulder throughout Friday’s practice sessions.

“The two days of testing we did here last week were very useful, even though I preferred to rest my shoulder on the second day because it was the first time I had been back on the bike since my injury at Laguna Seca,” Bautista explained.

“I’ve had a few more days to recover, but during this weekend we might have to change our approach and try and rest the shoulder on Friday to be in a position to tackle the races in the best possible condition.

“Luckily, the two tests I’ve done at this circuit between January and now will be a great help, we have some markers, I know the track better and as a result it will all be a bit easier.”

The factory Ducati squad confirmed the former MotoGP rider will depart the squad at the end of the season, making way for British ace Scott Redding.