Jones confident after strong lead up to Winton ASBK 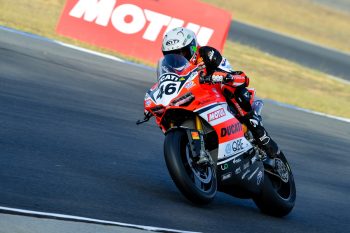 Mike Jones is feeling confident ahead of Winton’s fifth stop of the 2019 Motul Pirelli Australian Superbike Championship this weekend, the points leader gaining valuable seat time at a Victorian state championship round while also experiencing a positive test at the round five venue.

The DesmoSport Ducati ace holds down a slender one-point lead over the ever-consistent Cru Halliday (Yamaha Racing Team), with the former champion eager to clinch his first overall victory this season this Sunday.

“We had a few days testing at Winton a few weeks ago and although we still have some work to do to get a faster single lap time, I’m feeling really good about the weekend,” said Jones. “Ben and Paul continue to work hard behind the scenes to give me the best superbike in Australia, and although the competition is tough, I know I have what it takes to be there when it counts.

“It’s been two months since we raced at Morgan Park, and so we took the opportunity to race a state round at Phillip Island where Troy and I battled it out, which was a lot of fun to be honest. I love racing and I’m enjoying racing the Panigale FE, so I can’t wait to get on track Friday.”

The chase for the ABSK crown currently sees the top six riders separated by just 27 points.