Defending champion confident leading into this weekend's fifth round. 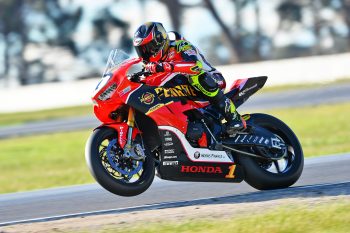 Reigning champion Troy Herfoss has highlighted the importance that Winton’s fifth round plays in his bid for the 2019 Motul Pirelli Australian Superbike Championship (ASBK) this weekend, as the points chase remains tight amongst the top six riders.

Following a mixed season so far, the Penrite Honda Racing believes his feeling with the bike is the best it’s been since wrapping up last year’s title at the Victorian venue, promoting a boost of confidence ahead of Sunday’s pair of races.

“Winton is a pretty important round at this point in the championship,” commented Herfoss. “It’s been an up and down series for a lot of people – a few have had some bad luck and others have kept themselves in it through consistency – so it is tight in the points.

“There are a number of guys who could capitalise on a strong round at Winton and, honestly, I feel the best on the bike since I did at this track last year when I won the championship. The test that we had here was really, really good for us, so I’m looking forward to getting out there no matter what the conditions are.”

The number one is ranked fourth in the championship standings, 15 points behind series leader Mike Jones (DesmoSport Ducati).