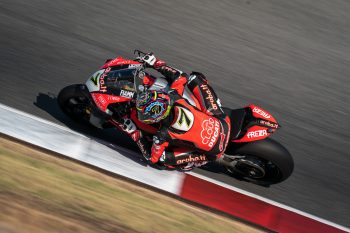 Advancements made at Laguna Seca’s ninth round and testing at Portimao last month have motivated Chaz Davies for this weekend’s 10th round of the 2019 Motul FIM Superbike World Championship (WorldSBK) in Portugal, despite the British ace acknowledging it’s going to be a tough encounter

The Aruba.it Racing – Ducati broke through for victory at Laguna Seca’s ninth round before the WorldSBK went into an extended break for the European summer, and after testing in Portugal, he has an extra ‘spring’ in his step for this weekend’s trio of races.

“After the summer break and about two months after my win, I know it’s going to be a tough race here at Portimao, but the gains we made at Laguna Seca and the work we did in the test have really put a bit of a spring in my step,” Davies explained.

“I feel like the bike is now a lot different to the one I’ve been racing this season and I’m looking forward to the race because I feel our pace is quite decent.

“Going on past results, for me this track is not the easiest one to get a win at, but I’m feeling optimistic because the Panigale V4 R is going better around here than the twin ever did. I’m feeling confident, even though Portimao is not an easy track and the bumps and undulations throw up a lot of different challenges.”

Davies is currently ranked seventh in the championship rankings as four rounds remain.