Brake issue the cause of Herfoss qualifying crash at Winton

Defending champion to start out of 12th following troublesome Saturday. 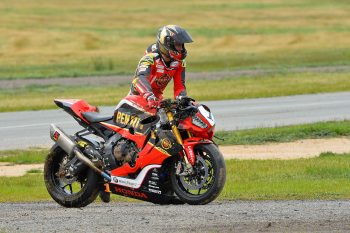 Penrite Honda Racing’s Troy Herfoss was forced to eject himself from the factory Fireblade on lap one of Q2 at Winton this afternoon when his brakes failed into turn 10.

Herfoss crashed toward the end of timed practice earlier in the day (pictured), which caused an issue with the front brake lever on the out lap in qualifying.

It was a major scare for the 32-year-old current Australian Superbike champion, eventually returning to the track for a single lap on his back-up bike with wet weather settings and fitted with slick tyres.

“I had no brakes…” Herfoss confirmed to CycleOnline.com.au after eventually posting a 1m22.520s. “The first crash in practice was on my own when it was getting a little bit misty and I asked too much of it into the fast left and went down.

“The team got that same bike ready in time for qualifying, but unfortunately coming into turn 10 there were no brakes and I had to bail off the side of it. It was definitely scary and I could feel in the lever that there was a problem with it.

“We know what happened – it was a result of the earlier crash. We got the wet bike going with slicks and got a lap in, but it didn’t feel great with a wet set-up, as you could imagine.”

“We were really strong on the hardest option tyre in practice and I was comfortably in the top three,” he reflected. “I never really went for one lap, so I was looking forward to trying the soft tyre in qualifying, but I created a little bit of bad luck for myself and then had some more from there.

“If we can roll out for warm-up in the morning and the bike’s running as good as it has been, I don’t think the end result will be too much different, even starting from 12th because I know that we definitely have really good pace here.”