Yamaha Racing Team rider set to start from P3 on the grid. 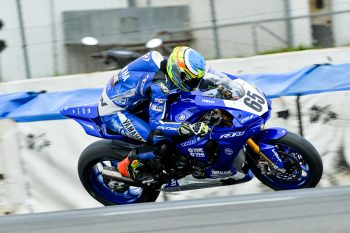 Yamaha Racing Team’s Cru Halliday has expressed the importance of starting from the front row in tomorrow’s pair of races at Winton’s fifth round of the 2019 Motul Pirelli Australian Superbike Championship (ASBK), as rain is expected to fall in what has already been a weekend of mixed weather conditions.

The New South Welshman suggested racing in the wet isn’t his biggest strength, although starting from third on the grid will play a critical role in achieving a strong result.

“That was the plan to get on the front row,” Halliday explained to CycleOnline.com.au. “I would’ve like to get pole and get that extra point, but it just wasn’t meant to be. We’re in for two exciting races tomorrow – it’s going to be pretty full-on with the weather front coming in – we don’t know yet if it’s going to be two dry races or two wet races.

“We just have to take those two races as they come, hopefully get as many points and stay on the bike. I’m a little bit on the back leg in the wet weather, so the front row start will give me a bit of head start being a bit further forward.

“Some riders haven’t been out there in the wet – even though I crashed, I know how slippery it is. It’s going to be interesting tomorrow – I’m not sure what the race pace will be, but if it’s fine weather, I’m sure it’s going to be up there.”