ASBK leader brushes aside any talk that 1299 FE has an unfair advantage. 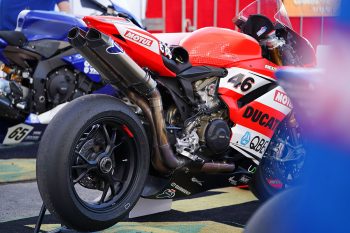 Jones, who replaced team co-owner Troy Bayliss after he was injured at the opener, stormed to the fastest-ever lap of Winton during qualifying yesterday at 1m19.994s.

There has been increasing discussion behind the scenes from competitors in relation to the capacity of DesmoSport’s 1299 Panigale R Final Edition, including a minor jab from title-rival Cru Halliday (Yamaha Racing Team) at the post-qualifying trackside podium yesterday.

“I know there’s been a been a bit of talk about the bike, the capacity and how fast it is or whatever [laughs]…” Jones commented when queried by CycleOnline.com.au. “But, I don’t know, those have been the rules for longer than we have had the motorbike.

“At the end of the day, you go racing and if you can be on the fastest motorbike then that’s the best thing that you can do. I’ve been fortunate in the past to be on quick motorbikes against the other guys and there’s always been that complaint. It’s not like it’s just the motorbike – you’ve gotta be able to ride it as well.

“It’s good to know that the other guys are getting a little bit frustrated though because you know that’s what they’re thinking about going into the races. It makes it better for me [laughs]!”

The ASBK regulations permit twin-cylinders to use up to 1300cc displacements, while four-cylinders are restricted to the more traditional 1000cc engines. DesmoSport Ducati has continued to use the 1299 FE – first introduced by the team last season – while Bayliss develops the latest Panigale V4R ahead of their 2020 campaign.

Fours are permitted a slight weight benefit at no less than 168 kilograms, while twins must weigh a minimum of 172kg. It’s understood Jones’ bike was in fact lighter than Hallidays R1M in qualifying trim yesterday, without taking the fuel levels into account.

“In ‘Superpole’ I was able to give it 100 per cent and with the combination of the bike from the DesmoSport Ducati team, we had the quickest set-up,” Jones added. “It’s really confidence-inspiring, because at Morgan Park I proved in the long races that we could go all the way to the end and be really fast.

“I definitely didn’t expect to go that quick. I’d went pretty close to that time at the test, but the conditions were much better and so were the actual track conditions – it just hasn’t been quite as good this weekend, so I was surprised to see that time.”