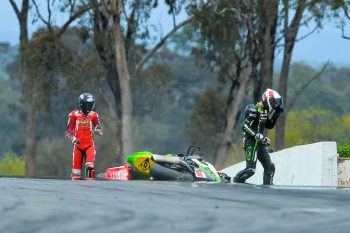 Kyle Buckley’s return to racing at Winton’s fifth round of the 2019 Motul Pirelli Superbike Championship (ASBK) ended bitterly as the Kawasaki BCperformance rider was injured in an unavoidable crash during race two.

Buckley, who charged to P12 in race one, was involved in the incident that called out the first red-flag of the second outing at turn two, when Mark Chiodo (Penrite Honda Racing) high-sided at the front of the field, with his CBR1000RR SP Fireblade sliding into the path of the number 83.

The Queenslander crashed heavily on his right shoulder, breaking his collarbone and suffering suspected further injury to his shoulder.

“The weekend was good until race two, I was making progress moving forward and I was happy with the first race,” said Buckley. “I got caught up in an incident in the second race on lap one and I think I’ve broken my collarbone and some injury to my shoulder as well.

“I’ll try get it sorted and be back for the next one at Phillip Island. I’m feeling good on the bike and I wasn’t struggling as much as I thought I would be, and I’m working well with the team. Hopefully we can be back up inside the top 10.”

The incident was the first of two at the exit of the opening esses in the final encounter, with the restart seeing Daniel Falzon (Yamaha Racing Team) and Lachlan Epis (Kawasaki) crash separately in the increasingly slippery conditions. The race was restarted again before being declared four laps in.