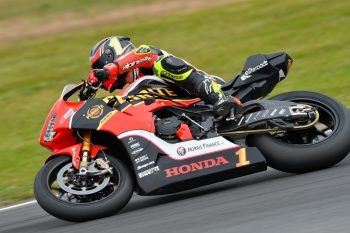 Defending ASBK champion Herfoss endured a pair of heavy crashes in Saturday’s free practice and qualifying sessions, only managing a single lap in Q2 to claim 12th position on the grid.

After starting towards the rear of the grid in race one, 32-year-old Herfoss quickly pushed his way through the field, navigating his way into third position by the end of the 16-lap encounter.

With rain beginning to drizzle, race two saw multiple early stoppages before being declared a wet race, although the mixed weather conditions saw Herfoss and the field remain on slick tyres.

He once again quickly promoted himself into the top three as rain began to fall more heavily, ultimately passing the leaders for P1 when the race was declared and his track position of third on the previous lap was recorded.

A pair of third-place results granted him third overall aboard the ER Motorsport-prepared CBR1000RR SP Fireblade, while he still retains fourth in the championship standings, now 21.5 points outside of the lead following five of seven rounds.

“It was a good race day, although obviously starting from 12th it was difficult to move forward,” Herfoss explained. “The first race I had the pace to run with the front guys, but I think third place was our best result anyway. In race two there was a lot of carnage – they declared the race wet and then it rained and they called it off – it didn’t make sense, so I’m pretty disappointed about that.

“I understand the safety side of things because we’re on slick tyres, but when it’s a wet race, you’ve got a choice to run wet tyres or dry tyres, so to me, there was no reason to stop. To be fair, the next race was dry anyway. When the red flag came out I was in the lead and my lap-time before that was almost my fastest of the weekend. I hope the guys that crashed are alright, but now we move on to Phillip Island.”

What looked set to be a promising weekend for teammate Mark Chiodo, unfortunately, took a turn on race day. The 21-year-old Victorian qualified in fifth – the best qualifying result of his career in the premier class – before experiencing a luckless pair of races on Sunday.

Chiodo suffered a light fall in race one but managed to salvage P15 after remounting, while a major crash in the early stages of the second outing saw him forced to withdraw. Credited 15th overall, Chiodo currently sits 11th in the standings.

“The weekend can turn around pretty quickly and it wasn’t too good of a race day for me,” Chiodo admitted. “I was fifth in qualifying and warm-up, so I felt really good. I had a poor start in race one and, while trying to make up positions, I had a small crash, which was disappointing.

“In the second race, it was really cold and slippery – I lost it in turn two. I definitely had good speed this weekend and if the weather was right, we would’ve been strong today. My confidence hasn’t gone though, I’m just about on those front guys, so hopefully I can prove that at Phillip Island.”

The Penrite Honda Racing squad now heads to Phillip Island in Victoria on 4-6 October for the penultimate round of the championship. Visit www.asbk.com.au for further information on the series.