British ace to be joined by Laverty in next year's championship. 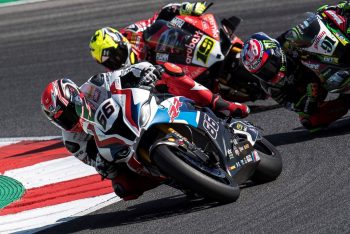 The BMW Motorrad WorldSBK Team has extended its contract with Tom Sykes that will see him through the 2020 season in the Motul FIM Superbike World Championship (WorldSBK).

Sykes, who recorded 13-7-9 scorecard at Portimao’s 10th round on the weekend, has earned three podiums in his first season aboard the new BMW S 1000 RR, while next year’s he’s set to be joined by Eugene Laverty.

“I’m very excited and proud to be continuing into the 2020 season with the BMW Motorrad WorldSBK Team,” said Sykes. “After such a successful year so far with the all-new BMW S 1000 RR, which is still very early in its development gives me great motivation moving forward.

“I really enjoy the development part and we are certainly moving in a strong way. Of course, with the support from the whole of the team and the prestigious BMW brand my expectations for the 2020 season will certainly move higher and back to where I feel most natural.”

Team principal Shaun Muir added: “As expected we have taken the option in Tom’s contract and extended it for a further year, this is good for our continuity and for the development for the BMW S 1000 RR. We hope that we can we progress further up the grid and fight for regular podium finishes in 2020.”

Sykes currently sits eighth in the championship standings as three rounds remain in the current season.