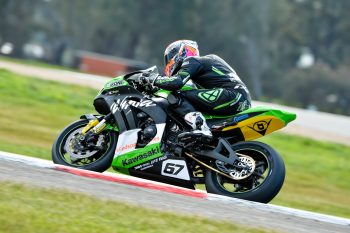 The Australian Superbike Championship (ASBK) took to a cold and, at times, wet Winton Motor Raceway, some 200km north-east of Melbourne for round five of the seven-round series. BCperformance Kawasaki Racing Team superbike racer Bryan Staring was rejoined by 2018 teammate Kyle Buckley, as he looked to maintain his championship position.

Kyle showed good speed early in the weekend, taking 12th in race one, despite not racing in the ASBK since 2018. However, a fallen rider’s bike hitting the ZX-10RR ultimately ended his final race. Staring took eighth in qualifying and raced to seventh, before multiple red flags saw the final race of the round cut short to just four laps with Bryan sitting fourth. Half points were awarded in race two due to the limited number of laps completed, securing sixth place overall and conserving third in the championship.

BCperformance Kawasaki Racing Team, Kelvin Riley: “It’s obviously not the result anyone was hoping for, with race two cut short due to the worsening conditions. However, for us, Winton was all about preserving our championship position as we move to longer tracks that better suit the KR108’s ability to offer strong grip for an extended period. Bryan did an incredible job throughout the weekend, and a seven-four finish means he remains third in the championship, and only 19 points from the lead. For Kyle, it was great to have him back on the bike and in the garage, and it was a real shame to have finish the weekend in RaceSafe. Hopefully, he can bounce back for the next round.”

Dunlop Motorsport Manager, Robbie Bugden: “The new KR108 MS-1 rear tyre being used in Superbikes this weekend has proven to offer strong, consistent grip for a lot of laps, and so has suited the longer tracks, longer races, aggressive surfaces, and higher racing temperatures. We’ve now seen the versatility it offers on a cold Winton race track. The BCperformance Kawasaki Racing Team has done a great job to preserve third place in the championship as we head into the final two rounds where we are confident of a strong close to season.”

The ASBK Championship now heads to Phillip Island on October 4-6 where the Dunlop technical team will once again be on hand, offering technical advice and tyre fitting to competitors.