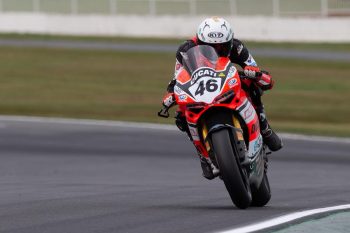 Mike Jones has once again secured second overall for the DesmoSport Ducati Superbike team at the fifth round of the 2019 Australian Superbike Championship (ASBK). The 2-1 results see the Queenslander increase his championship lead to 11.5 points on a cold, and sometimes damp, Winton Motor Raceway.

For the third round in a row, Mike Jones rode the DesmoSport Ducati Panigale FE to Pole Position in qualifying, setting a new Best Lap of the circuit (1:19.994) before battling with Wayne Maxwell for the lead throughout race one. After the third start, race two was finally underway after several racers crashed on a tricky, and in places damp, circuit before rain finally saw the final race cut short after just four laps with Mike Jones leading. With only four laps completed, the race was awarded half points, ultimately securing second overall for the round and extending the championship points tally to 217.5.

Ben Henry: “I’m satisfied with the results this weekend. Mike continues to ride the bike so well, we’ve got the Panigale FE working great, and we leave Winton in a better position than when we arrived. Mikes qualifying lap was nothing short of impressive, and with such a strong superbike field, it’s credit to him and his ability to ride the bike. In the first race, Mike lost grip towards the end, so we made some changes to the bike to correct that, and give him the best possible chance to win, however multiple crashes off the start and the weather closing in and ultimately forcing the end of the race, we never got to see it.”

Mike Jones: “I’m thrilled with the results this weekend and really happy to extend the championship lead to 11.5 points. We set a new best lap in qualifying and i went into the first knowing i could win. I pushed hard, battling with Wayne (Maxwell) all race, who, in the end, had a little more grip left and crossed the line in front of me. For race two, Ben and Paul made some changes that were set to see me stronger in the second half of the race, but it wasnt to be, with the race being called after three starts, and four laps of racing. I’ll take the win, and the increased lead, and focus on Phillip Island for round six in a few weeks.”