Racer comments from Victoria's fifth round of the year.

A selection of riders detail their weekend at Winton’s fifth round of the 2019 Motul Pirelli Australian Superbike Championship (ASBK). Team and privateer competitors can submit comments to [email protected] by Monday afternoon following events for inclusion in the post-event Quotebook feature. 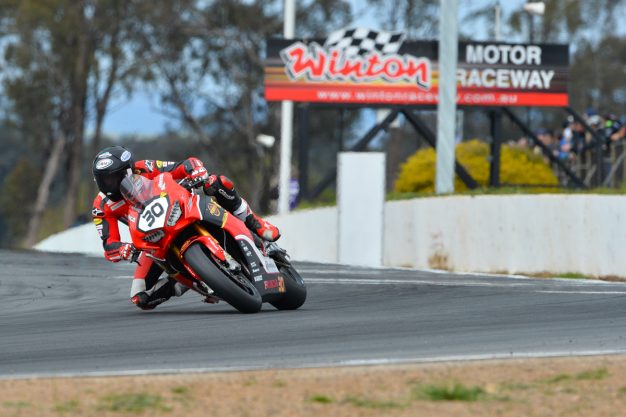 Troy Herfoss (Penrite Honda Racing) – Third overall:
It was a good race day, although obviously starting from 12th it was difficult to move forward. The first race I had the pace to run with the front guys, but I think third place was our best result anyway. In race two there was a lot of carnage – they declared the race wet and then it rained and they called it off – it didn’t make sense, so I’m pretty disappointed about that. I understand the safety side of things because we’re on slick tyres, but when it’s a wet race, you’ve got a choice to run wet tyres or dry tyres, so to me, there was no reason to stop. To be fair, the next race was dry anyway. When the red flag came out I was in the lead and my lap-time before that was almost my fastest of the weekend. I hope the guys that crashed are alright, but now we move on to Phillip Island.

Mark Chiodo (Penrite Honda Racing) – 15th overall:
The weekend can turn around pretty quickly and it wasn’t too good of a race day for me. I was fifth in qualifying and warm-up, so I felt really good. I had a poor start in race one and, while trying to make up positions, I had a small crash, which was disappointing. In the second race, it was really cold and slippery – I lost it in turn two. I definitely had good speed this weekend and if the weather was right, we would’ve been strong today. My confidence hasn’t gone though, I’m just about on those front guys, so hopefully I can prove that at Phillip Island.

Bryan Staring (Kawasaki BCperformance) – Sixth overall:
This weekend was definitely about damage limitation with two finishes today. The first one was seventh, which wasn’t too bad, and race two with fourth position, we couldn’t have hoped to finish that high based on how things were looking beforehand. I’m very happy with that and I’m happy to come out of Winton with points on the board and without losing too many points in the championship. I’m very happy to get to the final two circuits of the year, which I’m very much looking forward to.

Kyle Buckley (Kawasaki BCperformance) – 13th overall:
“The weekend was good until race two, I was making progress moving forward and I was happy with the first race. I got caught up in an incident in the second race on lap one and I think I’ve broken my collarbone and some injury to my shoulder as well. I’ll try get it sorted and be back for the next one at Phillip Island. I’m feeling good on the bike and I wasn’t struggling as much as I thought I would be, and I’m working well with the team. Hopefully we can be back up inside the top 10.

Mike Jones (DesmoSport Ducati) – Second overall:
I’m thrilled with the results this weekend and really happy to extend the championship lead to 11.5 points. We set a new best lap in qualifying and I went into the first knowing I could win. I pushed hard, battling with Wayne [Maxwell] all race, who, in the end, had a little more grip left and crossed the line in front of me. For race two, Ben and Paul made some changes that were set to see me stronger in the second half of the race, but it wasnt to be, with the race being called after three starts, and four laps of racing. I’ll take the win, and the increased lead, and focus on Phillip Island for round six in a few weeks.”

Matt Walters (Kawasaki) – Eighth overall:
Finishing eighth in the first race wasn’t too bad. I had a stab at gaining a few more positions in that one, which didn’t quite work, but it was okay and we advanced a lot with the bike. We’re moving in the right direction and that’s satisfying for us as a team. We were able to learn a lot with the electronics, which we haven’t really experimented with before, so I was happy with that. I had a small problem with the front brake early on, but managed to fix it mid-race, so once I got that sorted I was able to get into a groove and make up serious time. In race two I ran off the track when it started to rain. I really didn’t want to go down for no reason and ruin what had been a good weekend at that point, so I went off the track, lost a few positions and took what I could. It was nice to battle with a number of top guys, so hopefully, I can keep it up as we head to two tracks that I really like. 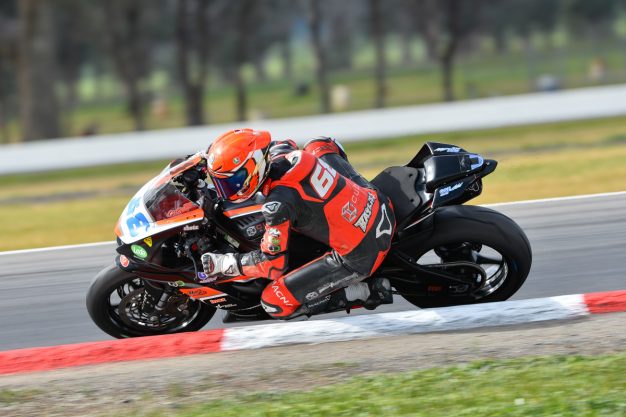 Tom Toparis (Landbridge Yamaha) – First overall:
I didn’t really want to be at the front as the first person is doing the ‘donkey work’ and they will normally crash. Oli was really quick in the beginning. He was so good in tricky conditions. As the track started to dry out, I took a few more risks every lap. Every lap I just got a little bit quicker. In the end, I’m just so glad to be able to get another win. The Landbridge Transport Yamaha team got the job done and we have once again come out on top, which is a credit to them. Thanks to heaps to them, Yamaha Motor Australia and all my sponsors.

Broc Pearson (Yamaha) – Second overall:
When I caught up to both Oil and Tom and I found it a bit hard to make a pass on the pair of them. At the end of the day we have gained some major points today for the championship. We now head to the ‘Island’ in second place in the championship, so I’ll be working hard to try and consolidate second in the championship.

Oli Bayliss (Cube Racing) – 11th overall:
It was a mixed weekend for me with a crash in qualifying one, to setting the fastest lap time in race one and finally getting a chance to race with Tom [Toparis]. The overall results don’t really show what my weekend was like though. I found a step in the first race that I haven’t felt before, and even though the bike stopped, the entire team was pumped on what they saw. Glen and Johno worked hard all weekend, and in race two I battled with my mate Tom and Broc Pearson, leading for the first four laps, and challenging him through the race. It feels like a turning point to be honest.

Avalon Biddle (Cube Racing) – Fourth overall:
We turned a corner this weekend in more ways than one! It’s safe to say we’re moving past a poor weekend at Morgan Park and progressing forwards! There’s still some work to do to keep moving forward and get the podium finishes I believe are possible, but fourth overall is certainly a good place to start. We made some suspension changes to the bike throughout the weekend and really made a bit of break though at the end of the final aualifying session on a dry track. With very limited track time I was slowly building confidence with the R6 to get closer to the expected race lap time. In both races, I was able to aggressive, make passes, and race with the guys around me rather than sitting behind. Phillip Island is up next and it can’t come quick enough.