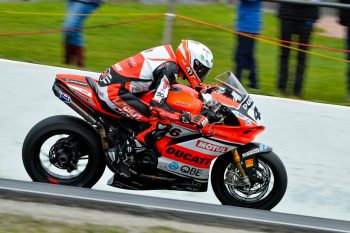 DesmoSport Ducati’s Mike Jones was happy to leave Winton’s fifth round of the 2019 Motul Pirelli Australian Superbike Championship (ASBK) with a strengthened points lead, despite missing out on a season-first overall win due to half points being paid for a shortened race two.

The former champion’s 2-1 scorecard would typically be enough to secure top overall honours, however after two stoppages and worsening weather conditions, race two was declared just four laps in, with Jones credited as the winner.

His total points tally, including one point for pole position, saw him wind up on 33.5 points as opposed to eventual winner Wayne Maxwell (Team Suzuki Ecstar Australia), who scored 35 with full points paying for his race one triumph.

“I’m ecstatic with the weekend, to come away with the result we did is really strong for the championship,” Jones explained to CycleOnline.com.au. “Also, to take into consideration, the conditions have been really sketchy, and the condition of the track has been really difficult – we saw that with a lot of riders crashing once it got a bit damp.

“To come away with the result is very good and I’m very happy. I’m just excited now because we go to two tracks I’m very familiar with, and I feel like I’m very strong at those circuits.

“I go out there and do the best I can – I’ve said it before, I really want to win races and be the best guy on the day, but at the end of the day, the championship is the end goal – we’re doing a really good job and the team and I work really well together. The extend the championship lead, it’s ultimate.”