Suzuki rider still recovering in hospital after suffering back injuries. 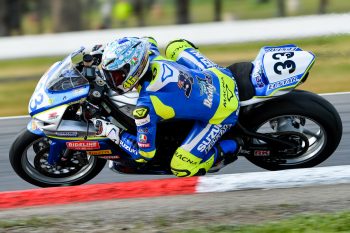 Supersport contender Reid Battye is considering himself lucky after suffering back injuries in a frightening race one crash at Winton’s fifth round of the 2019 Motul Pirelli Australian Superbike Championship (ASBK), the Team Suzuki Ecstar rider still recovering in hospital.

Battye high-sided exiting turn two while at the front of the field on lap one, and was collected by multiple riders as they attempted to dodge him and his motorcycle.

The youthful talent didn’t immediately seek treatment in hospital as he endeavoured to race the final outing, however increasing pain prompted him to undergo further medical evaluation.

Told of how serious the extent of his injuries could’ve been, Battye is thankful despite being hospitalised for at least the next two weeks, followed by an eight-week recovery that will end his season.

“I’m still in hospital now, and for next two weeks I’ll pretty much be laying still and flat in a hospital bed because I’ve broken a vertebrae in my back and I’ve broken my sacrum,” Battye explained to CycleOnline.com.au.

“Basically I can’t move or put any weight on my feet because they’re scared I’ll sever some nerves and become a paraplegic – I’m pretty damn lucky to walk away from it, that’s for sure.

“I didn’t go straight to hospital because I thought I’d be alright, and I was trying to ride the next race, but I basically tried to get on my bike and I couldn’t even sit on it – I couldn’t even get my leg over it, and then I realised that something wasn’t quite right. We packed up and I was in the car for about an hour – the pain really set in.

“I was really lucky because they said walking around afterwards -because of the break in my sacrum was unstable – they said it’s that unstable it could’ve split, and as soon as it splits, you start bleeding internally and you become a paraplegic if it breaks – it will just sever all the nerves.

“I’ve still got feeling and everything in my legs now, but I’m just taking it one step at a time and I’ve got a bit of a recovery ahead of me.”

Battye had been coming into form in his rookie Supersport campaign, scoring a pair of overall podiums at Wakefield Park and The Bend Motorsport Park, while he challenged for race victories at Morgan Park’s fourth stop of the series. He’s hopeful his effort this season will be enough to secure adequate support in 2020.