Dovizioso in shape for Misano grand prix this weekend 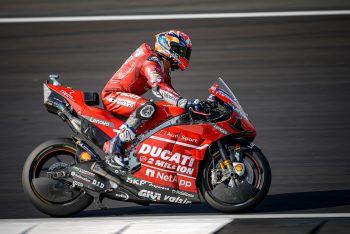 Andrea Dovizioso says he’s in shape for this weekend’s 13th round of the 2019 MotoGP World Championship at Misano after his frightening crash with Fabio Quartararo (Petronas Yamaha SRT) in the British grand prix.

The Ducati Team rider was deemed to have suffered a concussion, however returned to the bike in the week following at the Misano test, where he completed minimal laps.

The Italian ace is confident he’s back to full-strength for this weekend’s encounter, as he endeavours to make a return to the podium in front of a home crowd.

“After the incident in England, I’m lucky to be able to take part in the San Marino GP without any physical problems, because my Silverstone crash was a really big one and the consequences could have been much worse,” Dovizioso explained.

“During the two days of testing I was still not 100 percent fit, but now I’m fine, I feel in shape and am really anxious to race at this circuit, which for me is special, close to my home and where I’m sure that the support of the fans will be fantastic.

“The aim is to repeat the results of the last two seasons when we got onto the podium and we were competitive all through the weekend.”

Dovizioso is ranked second in the championship standings, where he sits 78 points behind leader Marc Marquez (Repsol Honda).