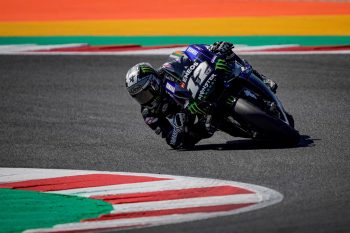 Before all that, it wasn’t the start to Q2 Espargaro would have been looking for as his RC16 stopped at the end of pitlane but, luckily, he was able to get away fairly sharpish with a bit of help from a mechanic. Meanwhile on track, Marc Marquez (Repsol Honda Team) backed out of his first flying lap and Franco Morbidelli (Petronas Yamaha SRT) was the first to set a benchmark time.

Just after that though, his rookie teammate Quartararo would go and set the quickest lap of the weekend despite a mistake in sector one – the Frenchman slamming in a 1m32.686s to lead the way. Morbidelli responded to go just 0.024 off but Quartararo then improved to go over a tenth clear, with Marquez jumping up to third on his first quick lap soon thereafter.

Heading back into the pits, the top four of Quartararo, Morbidelli, Marquez and Vinales were split by just 0.2 seconds. Home hero Valentino Rossi (Monster Energy Yamaha MotoGP) was sitting fifth ahead of Espargaro, with second in the championship Andrea Dovizioso (Ducati Team) only 10th.

Vinales switched bikes quickly, in and out like a flash, and on his next flying lap took third off Marquez to make it an all-Yamaha front row with three minutes to go, but there was plenty yet to come.

Morbidelli was setting red sectors before a huge slide coming into the third split ruined his lap, but what about provisional pole man Quartararo? He had Espargaro for company on his final lap but the Frenchman ran onto the green at the fast Turn 11 and voided his lap, leaving him unable to improve.

Espargaro was still setting personal bests though, and as the KTM rider took the chequered flag it suddenly became apparent quite how stunning his lap was as he took provisional pole by 0.011s. The fairytale wouldn’t quite prove perfect, but the performance remains superb.

It wasn’t perfect for the Austrian factory because Viñales was coming. Red sector after red sector, one of the men who has been blisteringly fast all weekend crossed the line to go pole by nearly three tenths, and there were only two riders left to try and topple him: Marquez and Rossi.

Marquez, shadowing Rossi, was also on for pole. However, after overtaking the number 46 into turn 11, the Championship leader ran wide. And, as it turned out, Rossi had also already exceeded track limits. But it boiled up to a final corner almost-clash, with the Yamaha slicing up the inside of the Honda as the duo came close to touching at Turn 14. Neither improved and both were summoned to a hearing with the FIM MotoGP Stewards to discuss the incident but no further action was taken. Marquez will start fifth, Rossi seventh.

That was that and the front row of Viñales-Espargaro-Quartararo was decided, with Franco Morbidelli taking his best grid position since Mugello and Catalunya to head up the second row. He’s just ahead of Marquez, with Dovizioso forced to settle for sixth on home turf. The Italian has, however, been a lightning starter of late…

Joining Rossi on row three are the Suzuki duo of Alex Rins and Joan Mir (Team Suzuki Ecstar), with Johann Zarco (Red Bull KTM Factory) racing having been eighth fastest in qualifying but the Frenchman needing to serve his three-place grid penalty given at Silverstone.

Takaaki Nakagami (LCR Honda Idemitsu) was P11 in qualifying but will start just ahead of Zarco, with Ducati test rider and wildcard Michele Pirro just behind the Frenchman on the grid in 12th.

Further back, some big hitters will be starting down the order: Cal Crutchlow (LCR Honda Castrol) will launch from P14, with the Ducatis of Jack Miller (Pramac Racing) and Danilo Petrucci (Ducati Team) starting from 16th and 17th respectively. In addition, Andrea Iannone (Aprilia Racing Team Gresini) will miss the remainder of the weekend after hurting his shoulder in a crash.

Tatsuki Suzuki took his first ever Moto3 pole position to put SIC58 Squadra Corse front and centre on their home turf at Misano World Circuit Marco Simoncelli, and he even did it via a trip through Q1. He’s joined on the front row by championship contenders Aron Canet (Sterilgarda Max Racing Team) in second, also via Q1, and home hero Tony Arbolino (VNE Snipers). 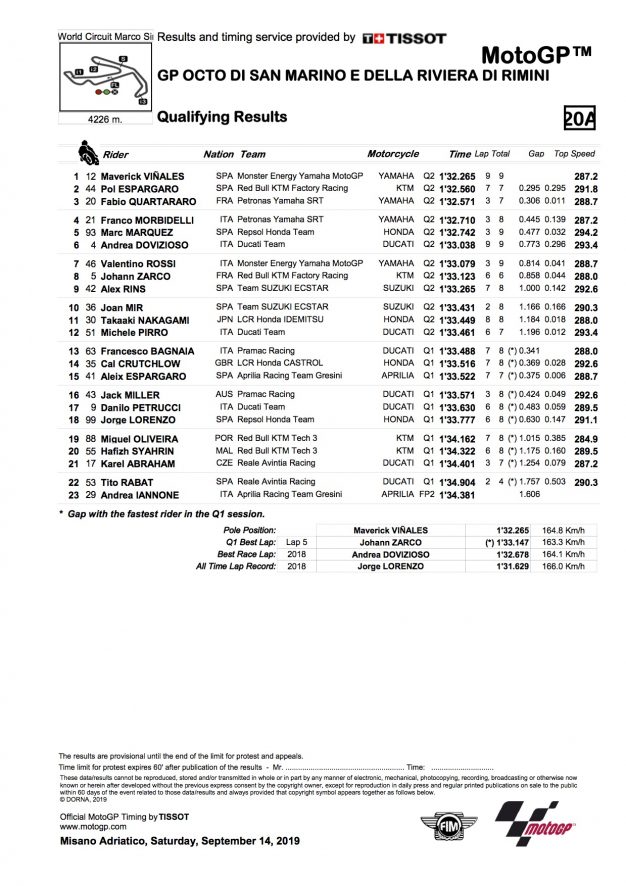 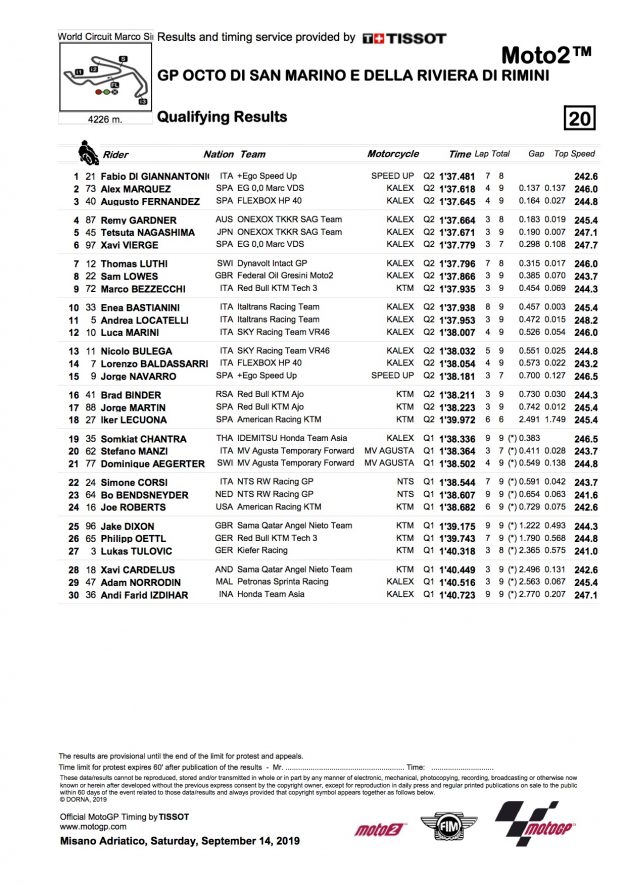 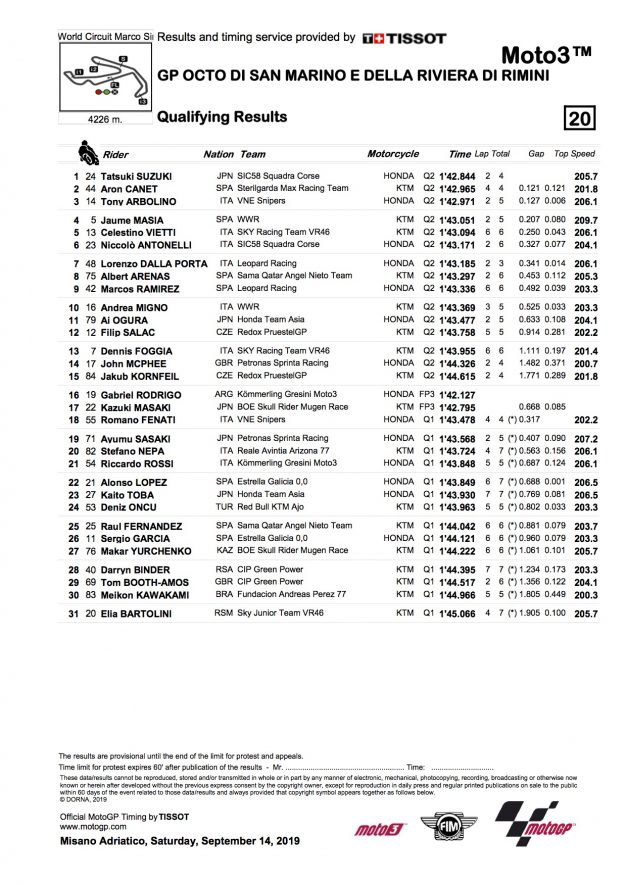