Faulty tyre the cause of Gardner’s early Misano crash

SAG Racing contender forced out of Moto2 outing 10 laps in. 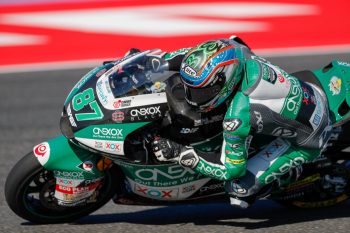 Remy Gardner believes a faulty tyre is the reason he crashed out of Misano’s Moto2 encounter just 10 laps in, the Australian experiencing several near-misses in the opening laps before his front-end gave way.

The SAG Racing ace, who confirmed his spot on the team for 2020 on the eve of the grand prix, narrowly missed a front row start after qualifying in P4, however he immediately experienced issues with the front tyre on the right-hand side.

Admittedly frustrated with the incident, Gardner is still optimistic with the strong form he possessed at the Italian venue as the series now heads to Aragon in Spain.

“I just missed out on the front row and we had great race pace, so I was confident after doing the hard work throughout free practice of running at the front,” said Gardner. “I got shuffled back a bit after the start and had to save several front-end slides, but it in the end there was nothing I could do, and I went down.

“It’s so frustrating as I wasn’t even pushing – we had worked all weekend on used tyres, and it seems in the race we got a really bad front tyre. I only had problems on the right side – I saved it five or six times, but there was only so much I could do.

“We actually crashed with the bike pretty much stood up, so I am a bit lost for words. Unlucky again but I did my best all weekend, we know we can be there so on we go to Aragon.”

Gardner is currently ranked 12th in the championship standings ahead of this weekend’s 14th round.