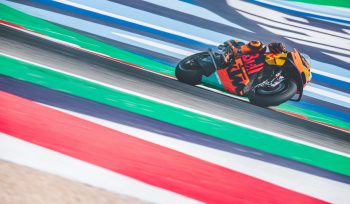 Red Bull KTM Factory Racing’s Pol Espargaro has continued his surge in form with the RC16 at Misano’s 13th round of the 2019 MotoGP World Championship, starting from the front row before recording a top 10 result.

The Spaniard qualified second fastest, marking the Austrian manufacturer’s first front row start in dry conditions, before putting on a strong performance to claim seventh behind Ducati Team’s Andrea Dovizioso, who currently holds down second in the championship standings.

“We started second and we fought [in the] top six/seven – we had a great weekend and we must be very proud,” Espargaro explained. “There are good riders and such good bikes that you need to go on the limit every single lap. At the moment I am controlling it quite well and I am finishing every race which is very important for the championship.

“We had good corner speed here but I was losing it all in turns three, eight and 10 with Dovi and 11 with [Franco] Morbidelli. It was not much. Just two tenths per lap – almost nothing, but in the end it makes a difference. I’m looking forward to jumping on the bike again and when you finish a race with that feeling then you want to start right away.”

Espargaro is currently ranked 11th in the points standings as the series heads to Aragon in Spain this weekend.