Pramac Racing's Miller scrapes into the top 10 at round 13. 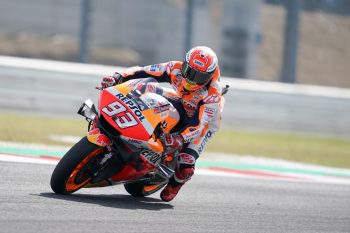 Marc Marquez (Repsol Honda Team) was the victor at the Misano grand prix after a duel with rookie Fabio Quartararo (Petronas Yamaha SRT), who led for most of the race before being passed in the closing moments, as polesitter Maverick Vinales (Monster Energy Yamaha MotoGP) completed the podium.

Vinales was on pole and the Spaniard made it count, keeping the lead heading into turn one as third place Quartararo grabbed P2, with Pol Espargaro (Red Bull KTM Factory Racing) dropping back slightly from second on the grid. Franco Morbidelli (Petronas Yamaha SRT) pounced for P3, with Marquez giving himself work to do after a wobble off the line.

But work is exactly what the seven-time champion did, grabbing third from Morbidelli at turn eight as the leading trio throughout the weekend found themselves 1-2-3 on lap one.

Sure enough, the three started to stretch away. The gap on lap two was already up to 0.7s over Morbidelli in fourth and it was Vinales leading the way, but not for long. Quartararo was right behind his fellow Yamaha rider and getting a good run out of turn 10, the rookie dived past to lead. Marquez wasn’t going to waste any time either, and lap three saw the 93 set the fastest lap of the race as Quartararo started to pull away.

Having seen that, Marquez dived under Vinales at turn 10 on lap four and locked his radar onto the Petronas machine at the front, as Vinales struggled to hold the pace. Further back, Espargaro was still able to make trouble Alex Rins (Team Suzuki Ecstar), Valentino Rossi (Monster Energy Yamaha MotoGP) and second in the championship Andrea Dovizioso (Ducati Team) for P5 as the KTM rider continued to impress.

Back at the front, Quartararo had a 0.8s lead over Marquez, with Vinales slipping to 1.5 seconds back on lap six. The Frenchman’s advantage wouldn’t stay above half a second for long though as the Repsol Honda began to reel the Petronas Yamaha in; the reigning World Champion and the MotoGP rookie locked in a face-off. Vinales then seemed out of range nearly three seconds back, but late race pace has often been a calling card for the number 12.

In the battle for sixth, Rins was given a long lap penalty shortly after finally dispatching Espargaro’s KTM, but soon it didn’t matter for the Silverstone winner. The Suzuki man was suddenly down at turn four, leaving his third place overall in the standings under attack.

Rossi pressured Morbidelli for fourth, Viñales was at a fairly constant gap, and Quartararo remained nigh on faultless at the front. There was no sign of the 20-year-old buckling under the pressure, with the gap between the two hovering at two tenths.

The laps ticked by and still there was no change, with the Frenchman holding firm. Marquez was fierce on the brakes coming into turn 10, but ‘El Diablo’ was a demon at picking the bike up onto the straight. There was simply nothing splitting the two, and Viñales was then starting to close the gap…

Onto the final lap, the number 93 was about to strike. Marquez had the run on Quartararo and led into Turn 1, but Quartararo got a good run out of Turn 2 and Turn 3 to bite straight back. Into turn four they went, Quartararo was back in front, but the back straight and Turn 8 provided a golden passing opportunity and Marquez got it stopped into the left-hander – slicing back into the lead.

Now it was Marquez’ to lose, with no way through for Quartararo at turn 10, although the Yamaha got a good run down through turn 11 and 12. As the tight left of turn 14 approached, the Frenchman was right behind the Spaniard. Marquez went defensive and was slow mid-corner, Quartararo tried to cut back…but there was no way through as the Yamaha almost touched the rear wheel of the Honda.

Subsequently, Quartararo had to sit up, and that was sadly game over. The reigning champion returned to winning ways after two consecutive second places, winning in enemy territory and overtaking Mike Hailwood’s grand prix win record in the process – 77 is now his tally. And his points lead? 93.

Quartararo’s second, however, made him ‘the real winner’, according to Marquez, and the Frenchman is the top Independent Team rider once again. Vinales didn’t quite have enough on Sunday afternoon for the men ahead of him in the end, but a fifth podium of the season continues his consistent form of late to edge clear of teammate Rossi in the Championship.

Speaking of ‘The Doctor’, it wasn’t a home GP podium Rossi would have been looking for, but a great fight with Morbidelli and a third consecutive P4 is a good turn around for the nine-time world champion since summer break. For Morbidelli, a strong and consistent weekend ends with a fourth P5 of the year – a nice way to celebrate his 100th grand prix race. All four Yamahas inside the top five at Misano is also promising for the Iwata factory.

Ultimately Dovizioso could do no more than sixth at the venue he won at last season, with Pol Espargaro next up in P7 as a solid reward for his – and KTM’s – impressive weekend. Upon his return from injury, Joan Mir was the sole Team Suzuki Ecstar finisher in P8, with Pramac Racing’s Jack Miller recovering from P16 on the grid to grab ninth ahead of fellow GP19 rider Danilo Petrucci (Ducati Team) in P10.

Augusto Fernandez (FlexBox HP 40) secured his third win of the season as the Moto2 race at Misano came down to the wire, with the Spaniard going toe to toe with Fabio Di Giannantonio (+Ego Speed Up) on the final lap to deny the home hero. Championship leader Alex Marquez (EG 0,0 Marc VDS) completed the podium, as Australian Remy Gardner (SAG Racing) crashed out of the encounter.

There’s no place like home to do the double and after claiming victory in race one, home rider Matteo Ferrari (Trentino Gresini MotoE) did it again on Sunday morning in MotoE, getting to the front and able to pull out a lead that proved unassailable.

Tech 3 E-Racing’s Hector Garzo took second once again, coming out on top in a multiple-rider tussle on the final lap, with Mattia Casadei (Ongetta SIC58 Squadra Corse) snatching the final place on the podium at the final corner. Australian Josh Hook (Pramac Racing) was 12th. 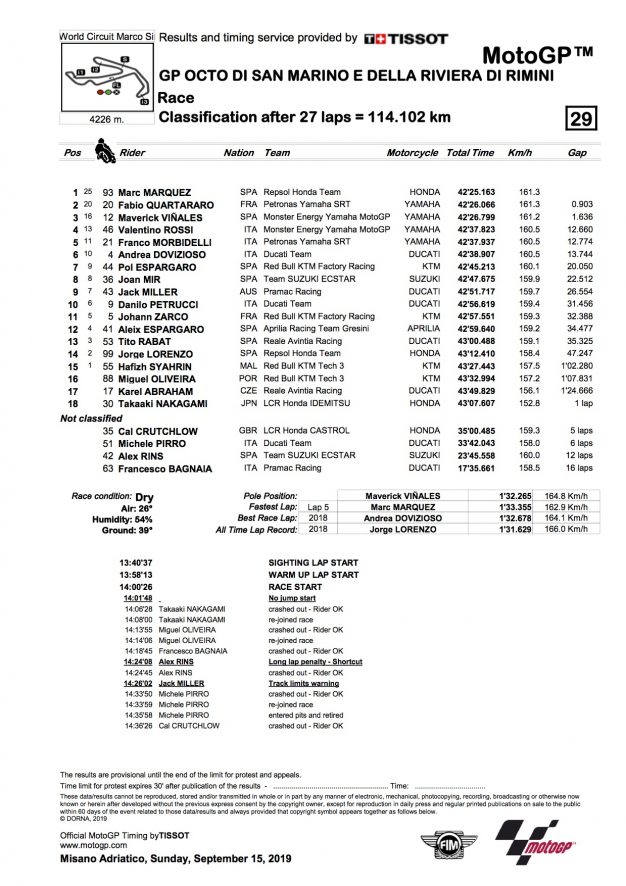 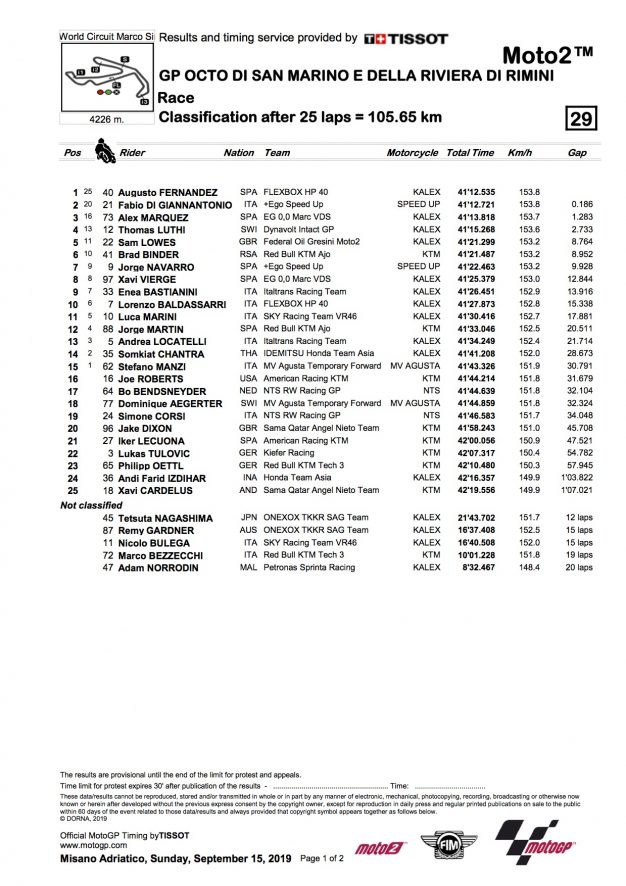 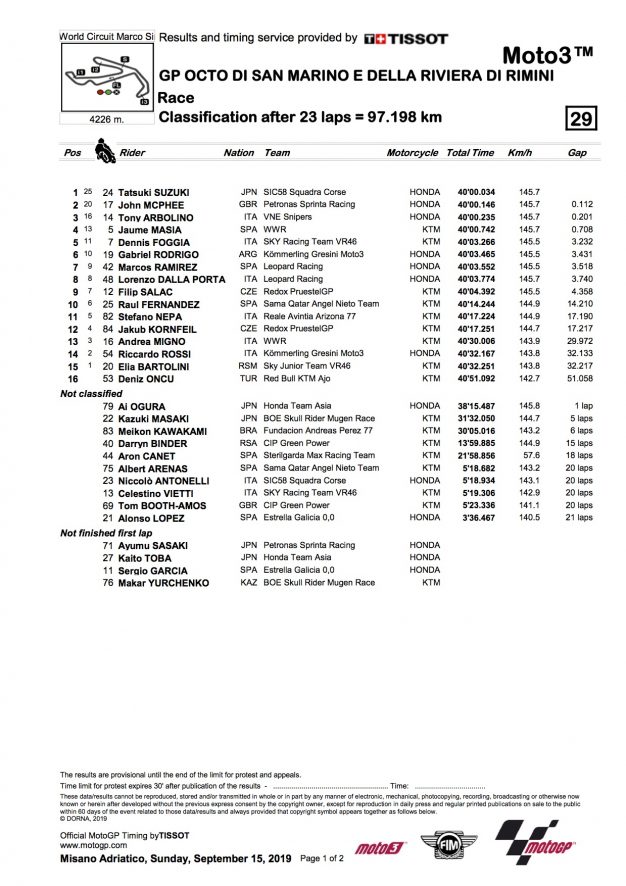 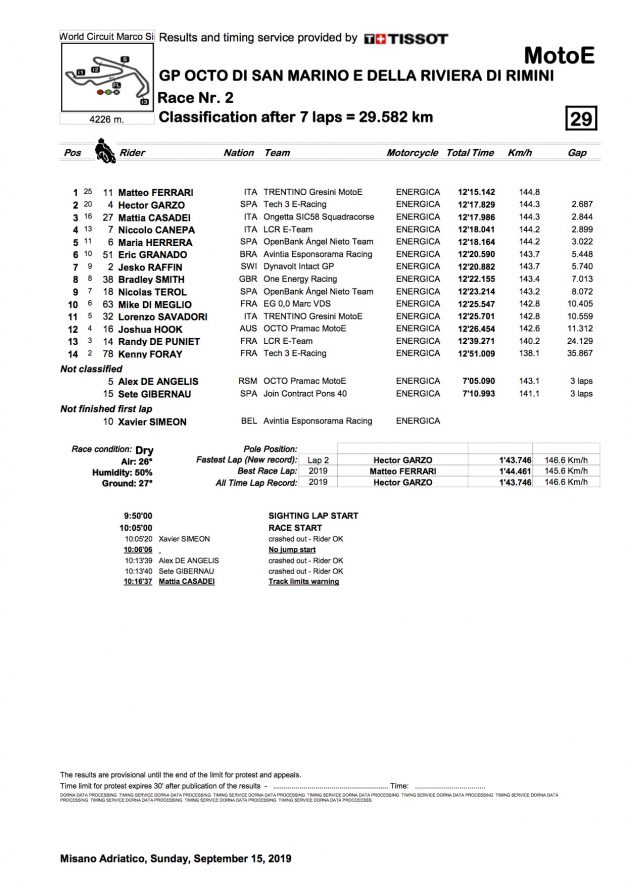