Ducati pilot experiences lack of grip at the Italian stop. 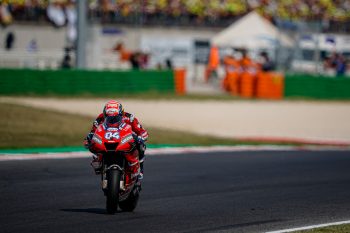 Ducati Team’s Andrea Dovizioso was forced to accept a sixth place finish at Misano last weekend, the Italian suffering from a lack of grip in the 27-lap encounter.

Admitting he always anticipated the weekend to be difficult, Dovizioso is pleased with the progress he made from Friday practice, where was ranked 10th on the timesheets before qualifying in sixth.

“It was a difficult race, as we had expected,” Dovizioso commented. “We all suffered because of the very little grip, especially at the front, and it was really difficult to push hard. Pity about the sixth place, because when I managed to catch Rossi and Morbidelli, who were fighting for fourth, there weren’t the right conditions to try and attack without making mistakes.

“However, I’m pleased with the work we’ve done this weekend, because on Friday our gap was a really big one and we managed to improve the situation for the race a lot.”