Factory Yamaha rider acknowledges challenges ahead at the Spanish venue. 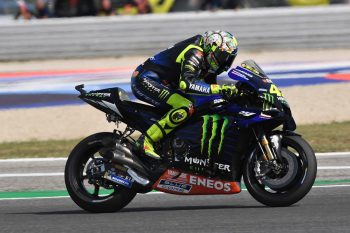 Multi-time world champion Valentino Rossi is hopeful of greater competitiveness this weekend at Aragon’s 14th round of the 2019 MotoGP World Championship, the Italian fan-favourite acknowledging it’s a difficult circuit for the Yamaha.

The Monster Energy Yamaha MotoGP rider finished fourth last weekend at Misano, which has inspired the 40-year-old to overcome the challenges he’s previously faced at the Spanish venue.

“After the race in Misano we have travelled to Aragon for a back-to-back race,” said Rossi. “We‘ve seen at the San Marino GP what we need to work on, so that‘s what we will be focusing on during this weekend – though Aragon is a difficult track for us, historically.

“We always struggled here, but this time we arrive after some good races. For sure we will have to work hard this GP, but we hope to be more competitive than we have been in the past.”