Australian Miller sets sixth fastest time at the Spanish round. 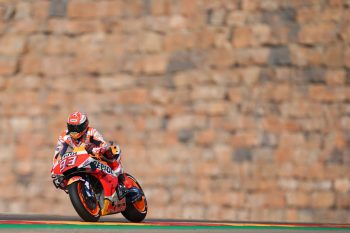 Marc Marquez’ (Repsol Honda Team) incredible 1m46.869s in FP1 sees the reigning world champion sit over a second clear of the field after day one at the Aragon grand prix, with the number 93 pushing for a hot lap early in the day and that proving unassailable thereafter.

Maverick Vinales was fastest from Monster Energy Yamaha MotoGP teammate Valentino Rossi in FP2 as the duo completed the top three on the combined standings, but the headlines remained Marquez’ awesome show of speed in the first session of the weekend – despite a crash in the afternoon, rider ok.

So why the push for pace? Marquez abandoned his MO as rain threatens to disrupt proceedings on Saturday, with a place in that all-important provisional Q2 graduation zone seemingly up for grabs on Friday given the forecast. And joining the top three in that top ten as it stands were many a usual suspect – with Alex Rins (Team Suzuki Ecstar) one surprising name to be left out. If it’s wet in FP3, the Silverstone winner may have his work cut out.

There were no such issues for Fabio Quartararo (Petronas Yamaha SRT) as the French rookie showed off his now customary impressive pace by taking fourth and ending the day as top Independent Team rider. ‘El Diablo’ slotted in just behind the Monster Energy Yamaha duo of Viñales and Rossi in FP2, with the Iwata marque dominating the afternoon…although Marquez’ morning hot lap remained out of reach.

Vinales spent much of that afternoon chipping away at his rival’s advantage and a few positions chopped and changed in the top five and ten, but a late rush for provisional graduation to Q2 soon changed the tone again. Rossi was one who needed a boost up the order after finishing FP1 outside the top 15, and Quartararo was on the edge too.

Ultimately, both would shoot up the timesheets and safely end the day in P3 and P4 respectively, just ahead of another stunning performance from Red Bull KTM Factory Racing’s man of the moment Pol Espargaro. After a solid FP1 within the top 10, the Spaniard ends the day in an ever-impressive P5 overall.

Jack Miller (Pramac Racing) slipped from fifth to sixth overall, although the KTM ahead only got the better of him by an infinitesimal 0.050, with LCR Honda Castrol’s Cal Crutchlow then even closer in seventh – only 0.008s in further arrears. Andrea Dovizioso (Ducati Team) kept the trend going as he ended the day only 0.027 off Crutchlow; the Italian eighth by the end of play after ending FP1 in P4.

Joan Mir (Team Suzuki Ecstar) impressed on Friday to take ninth and give himself a shout of a place in Q2, and he could be the only Suzuki rider thereafter Rins just lost out. A late lunge from Aleix Espargaro (Aprilia Racing Team Gresini) was what got the Silverstone winner and the older Espargaro brother ends Friday in tenth to make it every manufacturer in the top 10 on day one in Aragon.

Andrea Migno (WWR) blasted out the blocks in the Moto3 category, going quickest overall to beat Misano winner Tatuski Suzuki (SIC58 Squadra Corse) to the top by just 0.086s. Less than a tenth behind the duo at the top, Tony Arbolino (VNE Snipers) ensured the timesheets stayed tight in third. 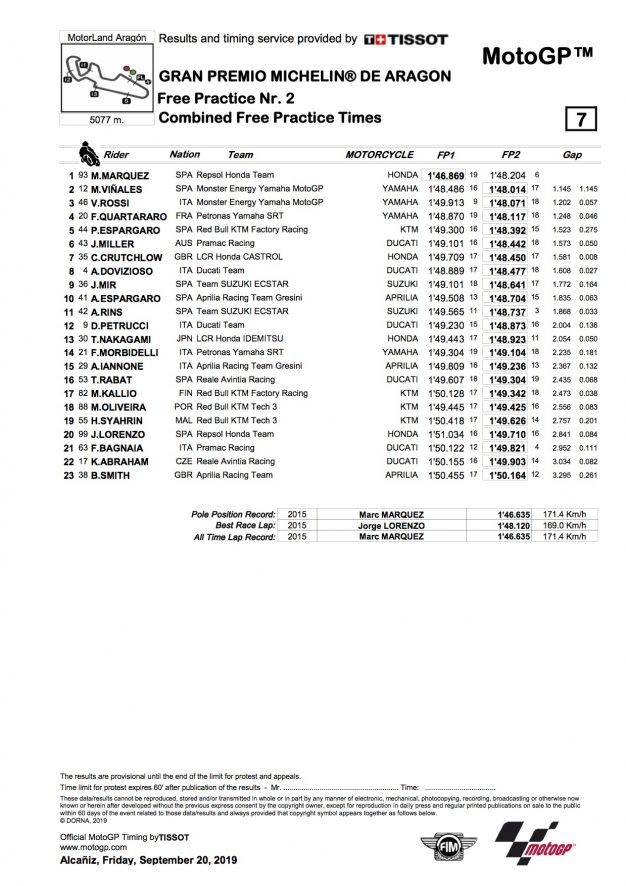 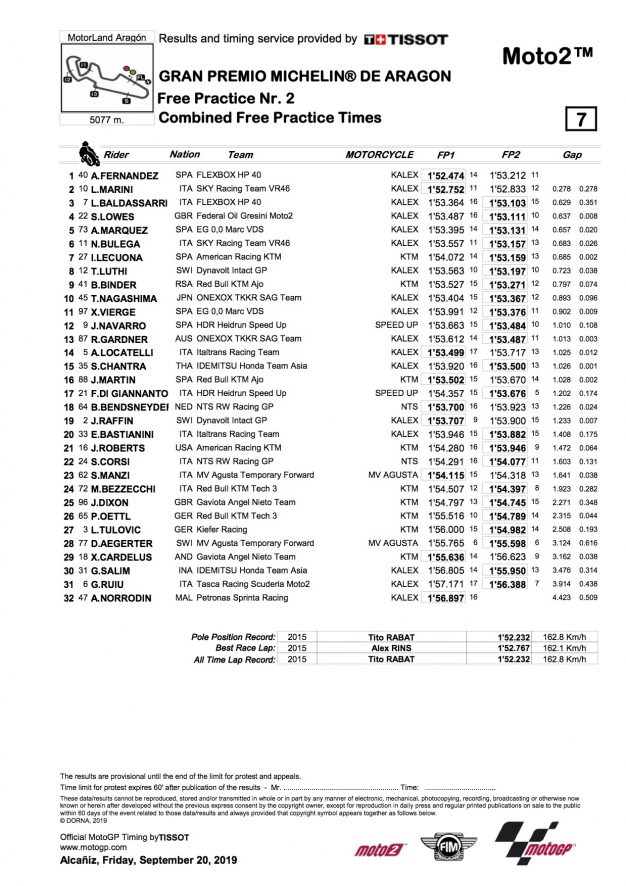 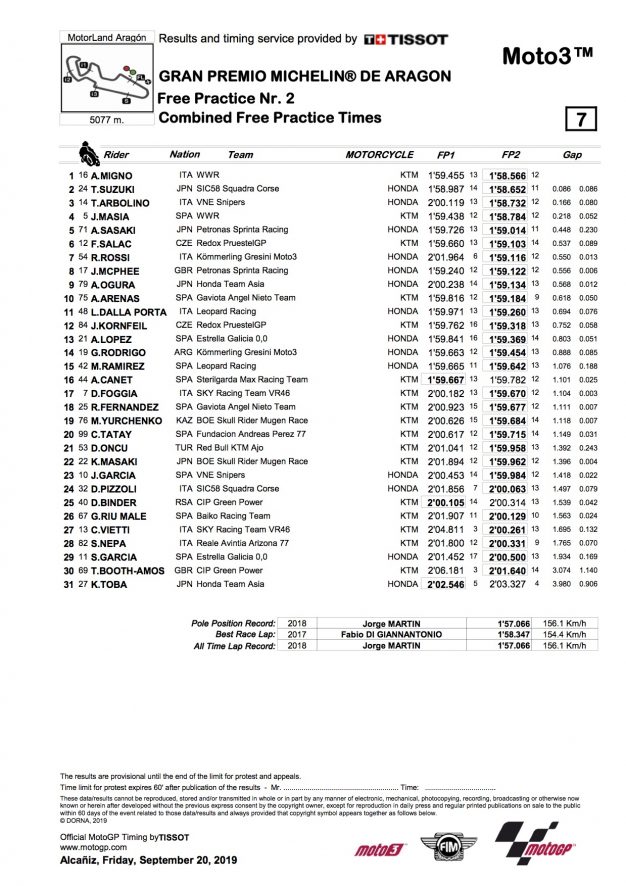