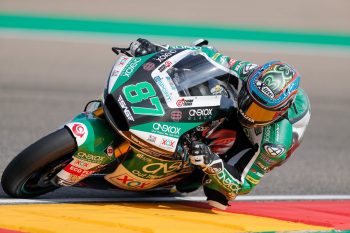 Remy Garnder admits it was difficult to overcome set-up challenges at the Aragon grand prix last weekend, which put the Australian on the back foot for the 21-lap Moto2 encounter.

Qualifying in P13, the SAG Racing contender was unable to progress throughout the Spanish race, crossing the line in the same position he started.

“Qualifying was a disaster and we were struggling all weekend to be honest,” Gardner admitted. “The problem is grip – after one lap I had nothing left. We planned to try something in the warm-up but there was overnight rain which compromised us a little.

“The race itself was awful. Qualifying ruined what we could do in the race and Friday ruined what we could do in qualifying, so that was the story of the weekend really. We made mistakes with regards to tyres and set-up, but to be fair in the race the bike was the best it had been all weekend, I just lost too much time fighting for the lower positions.

“Unfortunately, that’s the way it goes. The mid-race pace was good, I just lost too much at the beginning. It was the first weekend that we haven’t really been there, so we just need to regroup, and come back strong in Thailand and the remaining flyaway races before the season ends in Valencia!”

Garnder is ranked 12th in the championship standings as the series heads to Thailand on 6 October.