Podium ‘out of reach’ for Parkes in challenging Sepang ARRC outing

Points leader records 4-5 scorecard at the Malaysian round. 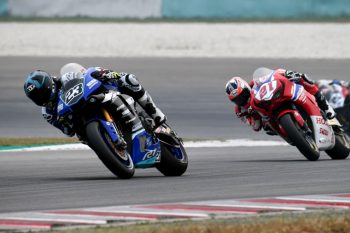 Australian Broc Parkes says he figured the podium would be out of reach at Sepang’s penultimate round of the 2019 Asia Road Racing Championship (ARRC) after experiencing a pair of close calls due to a lack of rear grip.

The Yamaha Racing Team Asean rider, who sat out of his regular duties in the Endurance World Championship (EWC) last weekend following a clash in dates, recorded a 4-5 scorecard, enabling him to hang onto the points lead with a 19-point advantage.

“Basically I couldn’t get any rear grip in the race so it was really tough,” Parkes explained. “I could tell it would be like that from the first few laps so I tried several ways to get around it. I almost highsided twice, so I figured the podium would be out of reach.

“I thought about the championship and tried to ride as best I could without crashing. In the end Azlan Shah won and picked up a lot of points, but on the last lap I tried hard and got fourth so that was good.”

The next stop on the ARRC calendar is the season finale, scheduled for November 29-1 December at Chang International Circuit in Thailand.