Be Wiser Ducati records 2-4 scorecard in the Netherlands. 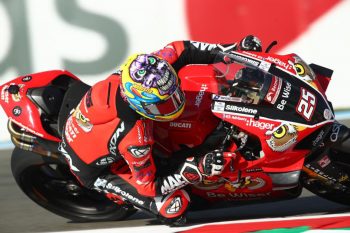 Josh Brookes was satisfied to overcome early challenges at Assen’s 10th round of the Bennetts British Superbike Championship (BSB), qualifying in fifth before charging to second in the opening encounter.

Despite acknowledging he discovered the best set-up of the weekend in race two, the Be Wiser Ducati rider managed just a P4 result, which still keeps well in the title fight as two rounds remain.

“After the struggles I had in the first two days, second in race one felt like a win,” Brookes stated. “I haven’t got close to the times I’ve set in previous years but the team gave me a bike I needed to challenge for a podium and although I didn’t have enough for the win, I was a lot closer compared to where I was.

“It was a good battle for second in the first race which I managed to come out on top of, but I was a little bit disappointed with fourth in race two as it was the best the bike had felt all weekend. Scott was on a different level to the rest this weekend but I’m only 14 points behind and I’m still very much in title contention.”

The Australian sits 14 points behind teammate and WorldSBK bound rider Scott Redding, as the BSB series heads to Donington Park on 4-6 October for the penultimate round.