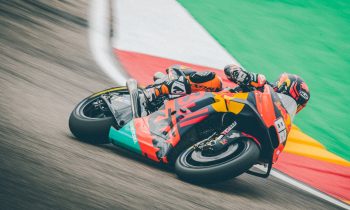 Kallio showed strong pace at the beginning of the 23-lap encounter, however suggested he made a mistake in tyre selection due to minimal time spent on the latest specification rubber, leading him to drop near the end of the outing.

Crossing the line P17, the result marked a valuable hitout for the Finnish ace, who’s replacing Zarco for the remainder of the season after he was benched by the Austrian manufacturer.

“My last MotoGP race was a long time ago so it was difficult to find the rhythm and get on the same level as the others,” Kallio explained. “We needed the laps today and I think we did quite okay. Everything can always be better but for the first weekend it was alright and we kept the mistakes to a minimum.

“The only disappointing thing was missing out of the points and I think maybe I made a mistake with the tyre choice. I was missing experience with how the soft or the hard would behave. We made good times in tricky conditions and I always like those and I had a good feeling with the bike.

Kallio was the only factory KTM rider out on-track on Sunday after Spaniard Pol Espargaro suffered a fractured wrist in FP4.