Strategy pays off for Dovizioso in Aragon resurgence 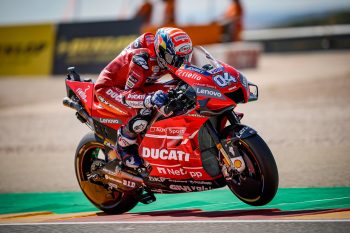 Andrea Dovizioso is thankful his tyre strategy paid off at the Aragon grand prix last weekend, which saw him surge from 10th on the grid to second by the end of the 23-lap outing.

The Ducati Team rider suffered a pair of challenging rounds at Silverstone and Misano, making his performance on Sunday all the more satisfying for the Italian contender.

“It was very important to get back onto the podium after the races at Silverstone and Misano, and so today I’m very happy, especially because of the way in which we were able to get this second place,” Dovizioso commented.

“I started 10th from the fourth row because of a mistake I made in qualifying yesterday, but I knew I had a good pace and on the grid we made the right choice of tyres, going for the soft rear. In the race I was constant right until the very end, I saved my tyres and managed to gain place after place until I could pass Jack and Maverick to finish the GP in second place.”