Honda pilot overcomes shoulder injury in time for the French round. 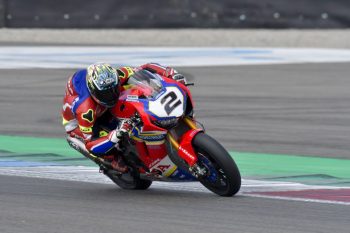 Moriwaki Althea Honda Team’s Leon Camier will return to racing this weekend for round 11 of the 2019 Motul FIM Superbike World Championship at Magny Cours in France, the British ace recently overcoming a shoulder injury.

Camier injured his left shoulder ligaments during the Superpole qualifying session at Imola, and underwent surgery in July when it became clear that despite his progress, he was not re-gaining the necessary strength and range of movement to ride.

“I’m happy and eager to get back to the team and to racing this weekend,” said Camier. “Being forced to stay away has been tough but the situation was what it was, so I just tried to cope as well as possible, focusing on my physiotherapy and training as soon as I was able to start that.

“Since the operation, my shoulder has got better and better day by day and now I can’t wait to ride my bike on Friday. I probably won’t be at 100% right from free practice 1 but I don’t expect any problems in getting through the weekend.”

It was announced this week that Honda Racing Corporation will field an in-house factory team in WorldSBK next year to be spearheaded by Alvaro Bautista, placing uncertainty on the future of Camier and the Moriwaki operation.