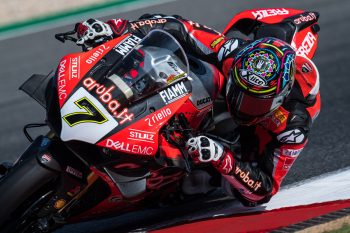 Chaz Davies says he’s feeling optimistic for the remainder of the 2019 Motul FIM Superbike World Championship (WorldSBK) after his recent surge in form is a result of an improved Ducati Panigale V4 R package.

The Aruba.it Racing – Ducati rider, who has signed on for 2020 with the outfit, struggled to come grips with the all-new machine at the beginning of the year, however has recently scored an array of podium finishes.

“I feel good for Magny Cours because the podium at Portimao has actually given me optimism for the rest of the season and I feel that it proves we have a pretty good package with the bike now,” Davies explained. “The French track has been quite kind to me in the past so we’ll try and get some good results there.

“I’m not really looking for any particular place in the championship now – of course it’s nice to be in the hunt for the top 3 but my goal is just to be competitive on the remaining circuits until the end of the year.”

The WorldSBK series resumes this weekend at Magny-Cours in France for round 11 of the series.