Perolari tops the timesheets in WorldSSP category at the French round. 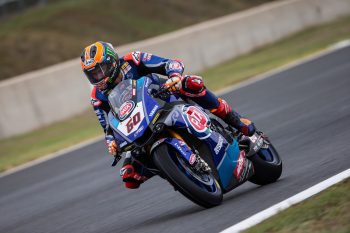 The inclement weather continued to wreak havoc with the WorldSBK class as the second session at the French round began in torrential rain. As a result, the lap times were significantly slower as the riders searched for grip.

Michael van der Mark (Pata Yamaha WorldSBK Team) left it late to finish fastest in the morning session but the Dutchman deemed the conditions too wet for any meaningful running and chose to sit FP2 out.

In van der Mark’s absence, Jonathan Rea (Kawasaki Racing Team WorldSBK) proved the man to beat during FP2 but it wasn’t without a scare. Rounding the Estoril corner, the world champion suffered a huge moment as the rear of his Kawasaki stepped out.

The Ulsterman maintained control and went on to top the session ahead of former teammate Tom Sykes (BMW Motorrad WorldSBK Team), current team-mate Leon Haslam and surprise package Ryuichi Kiyonari (Moriwaki Althea Honda Team) in fourth, although all riders were slower than they had gone in FP1.

Overall, van der Mark closes free practice Friday as the fastest man as he looks to chase down his teammate Alex Lowes in the battle for third in the standings. Van der Mark has finished on the podium at Magny-Cours in each of the last three years and will fancy his chances of doing so again, whatever the weather. Lowes ended the day in eighth overall, and much like his team-mate, took a safety-first approach during the afternoon downpour.

Leading the Kawasaki challenge overall was Leon Haslam after a consistent day for the 36-year-old. Haslam was just two tenths shy of the outright fastest time before backing up his team-mate in the afternoon, showing that both Kawasaki riders will be competitive if the heavens open tomorrow.

Rea’s day underlined the exceptional pace the Ulsterman clearly possesses, although a crash during FP1, followed by his near-highside in FP2, prove that nothing is certain in the Superbike World Championship. Marco Melandri (GRT Yamaha WorldSBK Team) earned the honour of top Independent rider with third spot, although four figured inside the top six as the heavy rain presented an opportunity for less fancied names.

Leandro Mercado (Orelac Racing VerdNatura) held onto fourth with home favourite Loris Baz (Ten Kate Racing – Yamaha) demonstrating his wet-weather credentials, finishing fifth in both sessions. Alessandro Delbianco (Althea Mie Racing Team) is another rider to watch if the weather takes a turn for the worse, with the Italian an impressive sixth today on the leading Honda.

With Rea and Lowes completing the combined top eight, Michael Ruben Rinaldi (BARNI Racing Team) ends Friday as the fastest Ducati rider, narrowly ahead of Eugene Laverty (Team Goeleven). Ducati’s championship hopes still rest on the shoulders of Alvaro Bautista (ARUBA.IT Racing – Ducati) and the Spaniard wound up in 13th, one spot ahead of teammate Chaz Davies with neither venturing out this afternoon.

Moriwaki Althea Honda Team is boosted this weekend by the return of Leon Camier and the Briton showed promising pace in both sessions, ending up 11th overall. By contrast, Sandro Cortese found the going tough with 19th in FP1, followed by a heavy fall at the Adelaide hairpin later in the day which left him with a left shoulder contusion, plus a left elbow contusion and abrasion. The German rider has been declared fit to continue though.

Australian Tom Edwards (Kawasaki ParkinGO Team) was 12th in the A group, while his compatriots didn’t make it out on track in the worsening conditions. 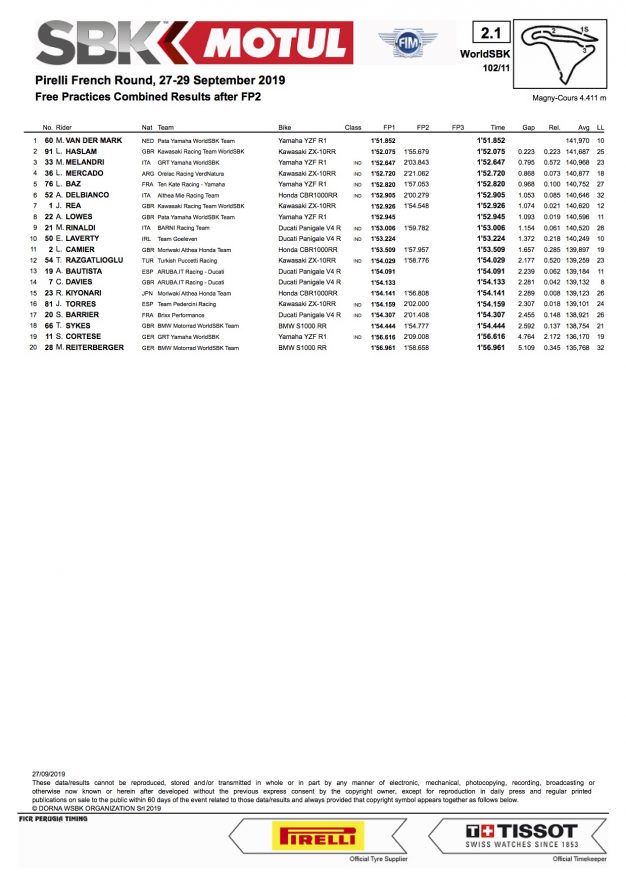 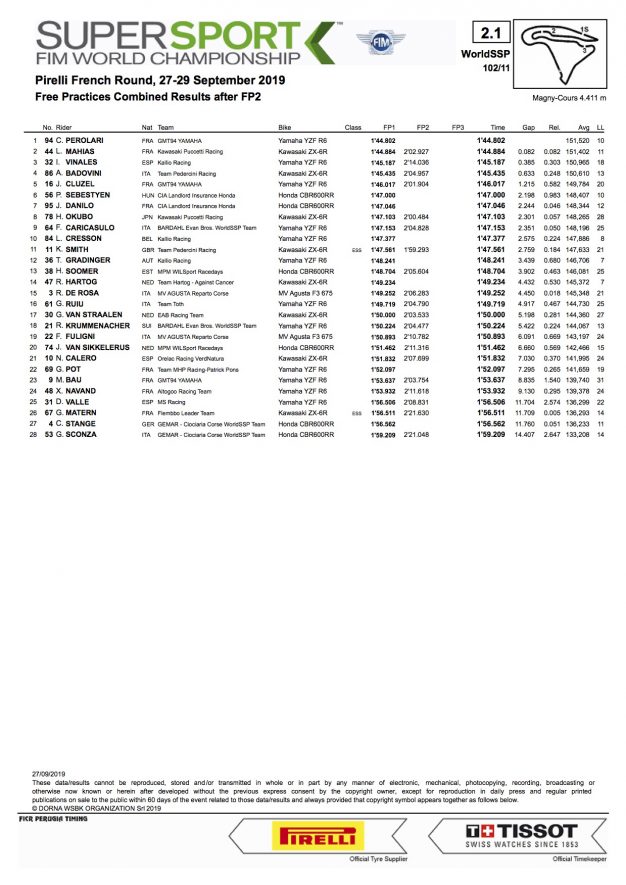 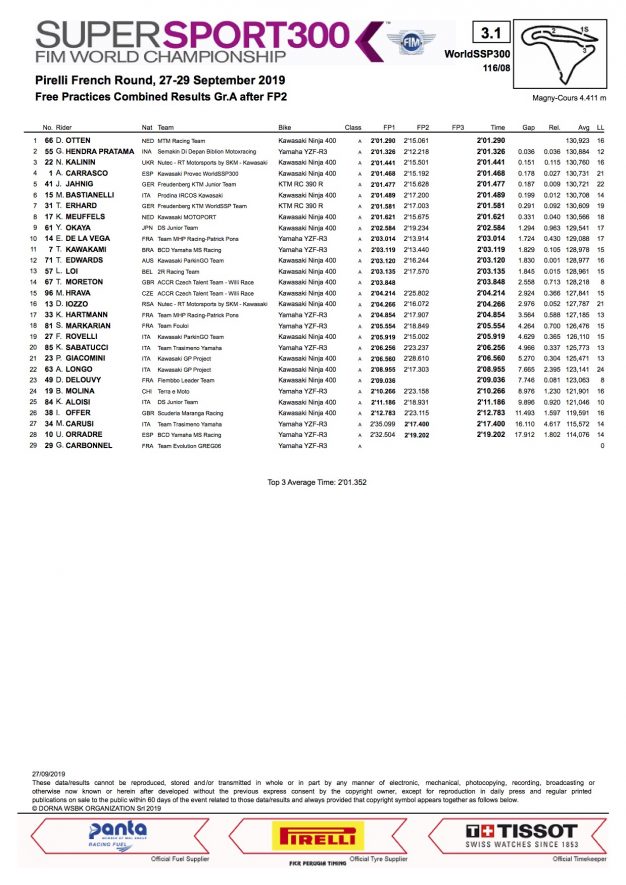